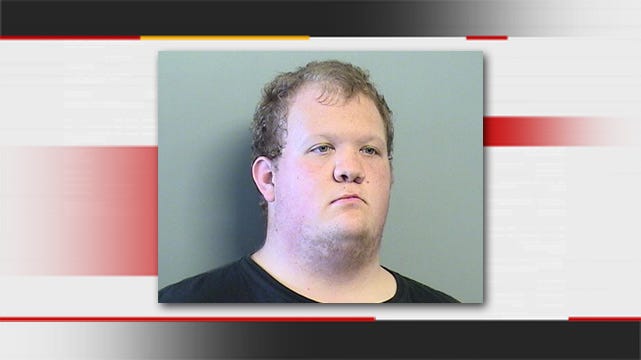 Tulsa Police arrested a 19-year-old Sand Springs man after a woman found his cell phone in her bedroom taking photos after she'd taken a shower.

Daniel Parks Ferguson was booked on one complaint of peeping Tom with photographic/electronic equipment. Police say he'd downloaded an app that took photos of the victim every few seconds.

According to an arrest report, Ferguson and the victim had been friends for several years. The woman said she knew he had hacked her social networking sites and email but "thought that he would have learned his lesson," the report states.

On Saturday morning, the woman went to take a shower and when she came out to her bedroom, she found Ferguson's phone in her bedroom. The phone was positioned straight up with the camera lens pointed at her, the report states.

Ferguson and another friend had been over at her home.

The woman talked to Ferguson and persuaded him to give her the code to his telephone, the arresting officer states in his report. She said that the 19-year-old man had downloaded an application for the phone so it would snap photos about every five seconds.

Police say that when they questioned Ferguson, he admitted to using the phone to take inappropriate photos of the woman. He also said it wasn't the first time he'd taken photos of her - that he set up the phone in the bathroom last week when she was over at his house, the report states.

Police say he'd set up the phone to take photos of her while she was using the bathroom and another time in her bedroom while she was changing clothes.

The phone has many photos of the victim "in the nude and partially clothed," the officer said in his report.

Ferguson is being held without bond, according to the Tulsa County Jail website.