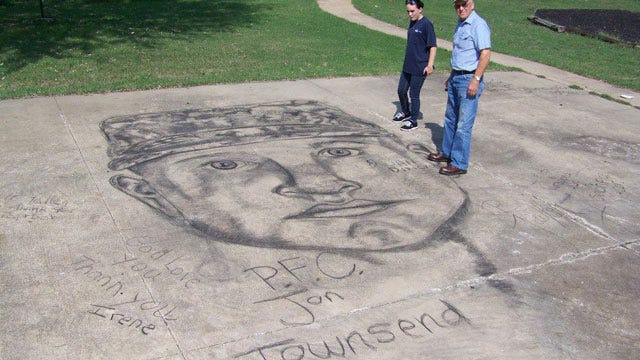 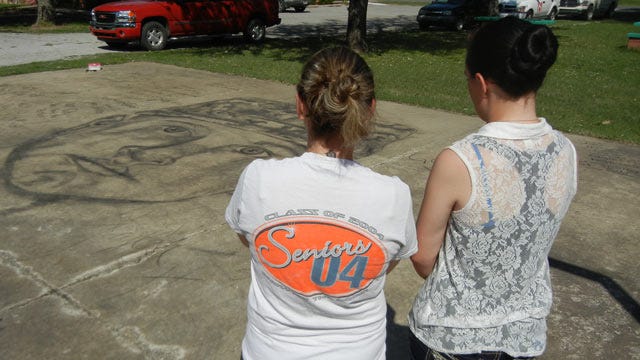 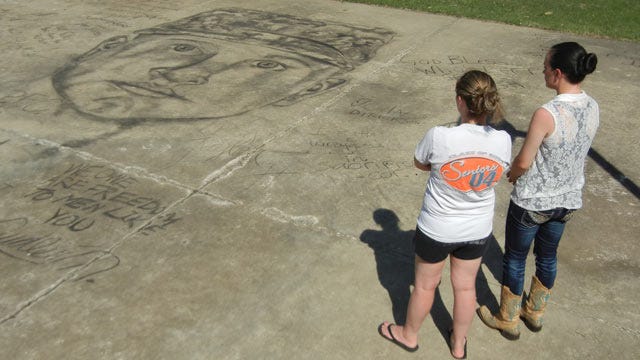 A 19-year-old Claremore soldier who died in Afghanistan in a Sunday insider attack is getting a special tribute in Oologah.

Taylor Hoffer, 18, who is an art education student at Oral Roberts University, drew a chalk portrait of Jon Townsend on the pavement in the Oologah Town Park.

Services for Townsend have not been set.

But, while his family waits for his body, a young artist has paid tribute to the fallen hero.

When soldiers are killed, people often don't know what to say to the family or do for them because it never seems enough.

One young girl did what she could, though, and it's helping the family.

There were some quiet moments Friday on a basketball court in Oologah, as the sister of Townsend looked over a portrait of her brother with the young artist who created it.

It's a charcoal drawing that Taylor Hoffer decided to do, after hearing news of the young soldier's death.

"I didn't know him, but it sounded right, in there," Hoffer said.

For the last week, Townsend's family has been in a whirlwind of grief and comfort.

They knew they loved Jon, but didn't know so many other people did as well.

"There's been an outpouring of love from people who we know and from strangers. Jon was the kind of person who could move people, whether you knew him or not," said Townsend's aunt, Honee Sue Grumbein.

The drawing was made from Townsend's military photo that Hoffer found online.

She said, while she was drawing him, she thought about what kind of man he might have been, but really didn't know until she met his family Friday morning.

"I just had a face really, I didn't have a person, and when I met them, it really gave me the whole idea of what he was," Hoffer said.

Townsend's family said they like the way it turned out, and they especially like that people have started adding their thoughts, with pieces of charcoal that were left behind.

They're especially thankful that a young girl took the time to remember.

Tucker: "For someone to be able to use the things that God gave them in such a respectful manner, it's great," said Townsend's sister, Jennifer Tucker.

Grumbein said, "Things like that will help, and no one will ever be able to take memories from your heart."

Townsend's portrait is only temporary and the rain will wash it away, but for a few quiet moments, it gave a grieving family some comfort.

Hoffer hopes people will pay their respects by signing the nearby pavement. Since that portrait will fade, she is planning to redo it on canvas so the family will have something to keep.