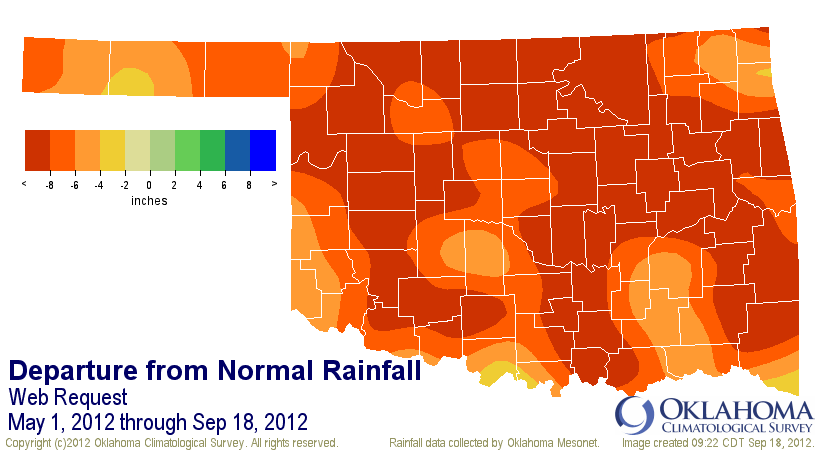 The map on the right, courtesy of the OK Mesonet, shows the departure from normal precipitation across the state since the first of May. Not a pretty picture as much of the state is more than 8" below normal during that time frame.

The second map on the right is the QPF map valid through Monday morning. Not a pretty picture either as it shows pretty much a dry forecast with possibly some rain for the extreme NE corner of the state. If those rains do occur, it will be during the early morning hours of Friday when there is a slight chance of a shower or storm for the more NE counties. Other than that, we have basically a dry forecast not only through the weekend but quite likely well into the following week.

In the short term, sunny skies and big warm-up for today will continue through Thursday and into the day Friday. After a cool start this morning, temperatures will be above normal this afternoon with daytime highs in the mid-upper 80s expected. Gusty SW winds and low humidity levels this afternoon will also create some fire danger concerns. Tonight will see clear skies and light southerly winds so another pleasant evening and overnight with morning lows in the 50s to near 60.

A weak frontal boundary is expected to make it to near the hwy 412 corridor later Thursday, stall out, move back north for early Friday, and then get a bigger push through the state late Friday and Friday night. Other than a wind shift to a more NE component behind the boundary, this is not expected to make much of a change for Thursday. Partly cloudy to mostly sunny skies will still prevail and daytime highs should be near the 90 degree mark, so quite warm for the afternoon hours.

A chance of showers/storms for early Friday morning should be largely confined to the extreme NE counties as that boundary starts to move back north and the nocturnal low level jet tries cranks up. Any showers/storms should then be dissipating by later in the day leaving partly cloudy skies and southerly winds shifting back to the NW as the front finally gets a bigger push to the south for the evening and overnight hours. Again, this does not appear to be a big rainmaker either so most of us will stay dry. Temperatures on Friday will be a little tricky due to any showers and residual cloud cover, but should still make it well into the 80s to near 90 by days end.

The weekend looks very promising with mostly sunny skies and a brisk northerly wind for Saturday bringing drier, cooler air back over the state. For the official arrival of the autumn season on Saturday, we should be in the 50s that morning and in the 70s to near 80 that afternoon, so a cooler than normal start to fall. Sunday will start off even cooler yet with 40s to around 50 that morning followed by 70s that afternoon. After that, a return to southerly winds and lots of sunshine should get us back into the 80s for early next week.