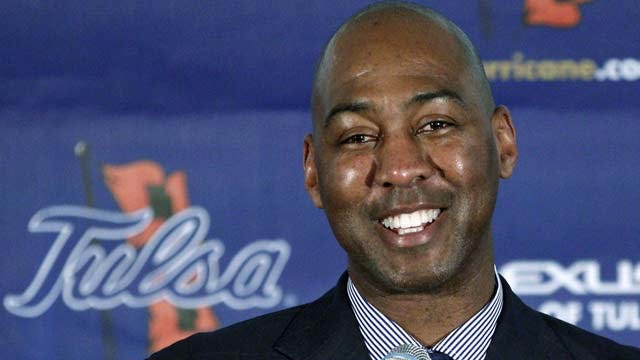 There has been excitement around the Tulsa basketball team since Danny Manning was hired as head coach in the offseason and now there is even more reason to look forward to the season with the release of a stout 2012-13 schedule.

The Golden Hurricane schedule features 10 teams that posted at least 20 victories last season and a total of 10 schools who participated in postseason tournaments.

The Hurricane will play five schools who went to the NCAA Tournament – Wichita State, Creighton, Florida State, Memphis and Southern Mississippi. Tulsa will take on three schools from last season's NIT in Oral Roberts, Marshall and Central Florida. Tulsa will also play TCU, which played in the College Basketball Invitational Tournament, and Rice, which played in the CollegeInsider.com tournament.

"We are very pleased with the schedule we have put together in our first year," Manning said in a press release. "With 10 post-season teams and five NCAA Tournament opponents, this young team will be tested every night on the court. They'll have to grow up quickly, but that is why we worked hard during July and August, and will play the four Canadian exhibition games this week. I believe our non-conference schedule, especially with road contests at Creighton and Wichita State and a neutral site game against Florida State, will challenge and prepare our team for Conference USA play."

For the second straight year, Tulsa will face three old Missouri Valley Conference rivals in Creighton and Wichita State on the road and Missouri State at home, while the Hurricane also hosts an old Western Athletic Conference foe in TCU.

The Hurricane travels west in November for a three-game tournament in San Diego. Tulsa plays Northern Kentucky (Nov. 15), San Diego (Nov. 16) and closes out against Cal State Northridge (Nov. 17). This will be the first meeting in the series against both Northern Kentucky and San Diego, while Tulsa has a 2-1 series edge against Northridge.

Tulsa plays two games over the Thanksgiving weekend as Jackson State visits the Reynolds Center on Nov. 21, while Stephen F. Austin comes to town for a Nov. 24 contest.

TU continues its most-played rivalry when it hits the road to face Wichita State on Nov. 28. The Shockers hold a 61-60 edge in the series that began in the 1930-31 season.

December tips off with old MVC rival Missouri State coming to the Reynolds Center on Dec. 5. The Hurricane will then host another former conference rival, from the Western Athletic Conference, as the Big XII's TCU Horned Frogs come on Dec. 9.

After the TCU game, the Hurricane will play away from home five times, including four road games and a neutral site contest.

Tulsa travels to face the UALR Trojans on Dec. 15 then Creighton on Dec. 19 in Omaha, Neb.

After a year off in the series, cross-town rivals Tulsa and Oral Roberts face each other at the ORU Mabee Center in a Dec. 22 contest. Tulsa leads the series 31-16 and has won the last three games, including a 57-52 road win on Jan. 20, 2010.

Tulsa will play 2012 NCAA participant Florida State in a neutral site game at the Orange Bowl Classic in Miami on Dec. 29. Tulsa and FSU have played three times before, as the Seminoles have won all three meetings. The last game between the two schools came on Dec. 30, 1982 at the San Diego Cabrillo Classic. Tulsa begins 2013 by closing out the non-conference portion of the schedule against Buffalo on Jan. 2.

The C-USA schedule for the Hurricane will begin on the road in a much-anticipated contest as student meets mentor. Tulsa travels to open the league season against the SMU Mustangs on Jan. 6. The game features Tulsa's Manning leading his team against his old college coach Larry Brown, as Brown is also in his first season as the SMU head coach. Manning led the Brown-coached Kansas Jayhawks basketball team to the 1988 NCAA Championship.

Up next for the Hurricane is the team that ended Tulsa's 2011-12 season when Tulsa travels to face the Marshall Thundering Herd on Jan. 9. The two teams battled to three overtimes in the C-USA Championship Quarterfinals in March before the Herd snagged a 105-100 victory.

Tulsa then hosts Southern Miss on Jan. 26. The Hurricane suffered a hard-fought 77-69 overtime loss at USM last year before Southern Miss finished the 2011-12 season with an overall 25-9 record and finished second in the C-USA standings, while advancing to the NCAA Tournament.

Tulsa begins the month of February at defending C-USA Champion and NCAA participant Memphis on Feb. 2. The last time Tulsa visited Memphis the Hurricane claimed a 68-65 victory on Feb. 2, 2011.

The Hurricane hosts UAB on Feb. 6 before traveling to El Paso to face UTEP Miners on Feb. 9 for the second meeting of the season.

Tulsa comes back home for its second game against Houston before hosting East Carolina (Feb. 20) for the only meeting between the two schools. TU closes out February hosting UCF (Feb. 23).

Tulsa closes out the regular season with three games in the month of March, including home contests against Tulane (March 2) and SMU (March 6) in the second meeting of the year between the schools. Tulsa wraps it up with a March 9 game at Rice.

Tulsa has a built in advantage with the Conference USA Tournament being held in the BOK Center from March 13-16.

"Along with our conference slate, we feel that this is the type of schedule that will help prepare us for the C-USA Tournament, which we are excited to host at the BOK Center," Manning said. "We hope our fans are just as excited to watch us play as we are to go out and compete this year."

Tulsa will play exhibition games against Emporia State (Kan.) on Oct. 27 and against Panhandle State (Okla.) on Nov. 4.