Any Relief in Sight? 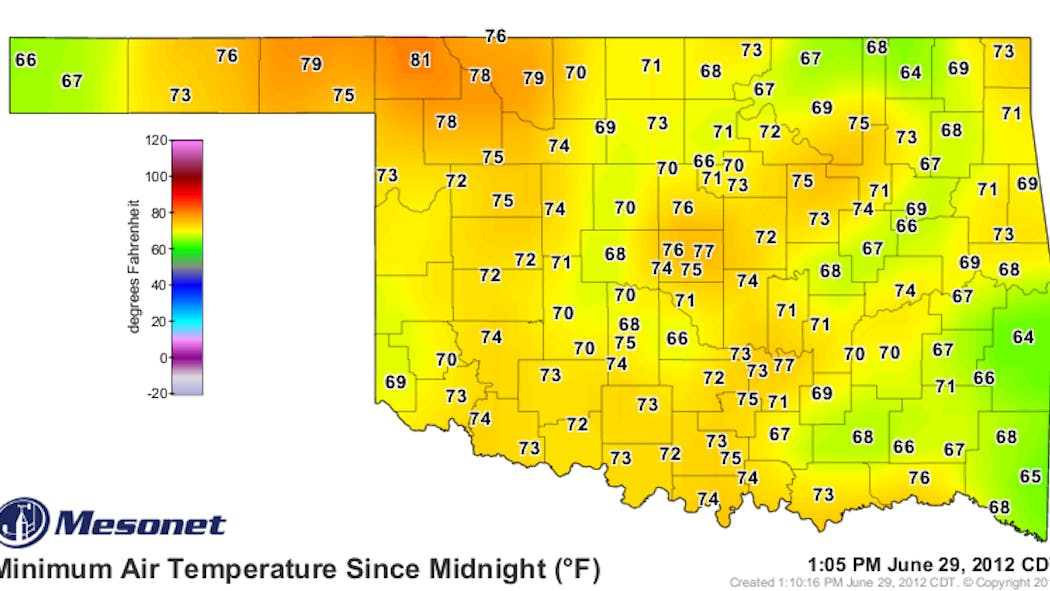 Notice the low temperatures this morning on the map to the right as measured by the OK Mesonet. Rather comfortable at most locations with lows in the 60s and lower 70s. However, at the Tulsa International Airport where our official temperature records are maintained, we tied a record warm low of 80 degrees. So what is going on here? The reason for this large temperature discrepancy is that the urban environment of Tulsa with all the concrete and asphalt just does not cool off as much at night as the surrounding rural environments. Also, we had a S to SW breeze through the overnight hours which would have the effect of keeping that urban warmth right over the airport all night long. This is what we refer to as the Urban Heat Island effect. By the way, that 80 degree record we tied this morning was first set in 1980 which also happens to be the hottest summer on record for Tulsa. Not a good way to start the day to say the least.

So, is there any relief in sight? Sort of. There continue to be signs of a weakness developing in the dominant high pressure ridge aloft that is keeping us so hot and dry. Not much of a weakness, but it should be enough for somewhat cooler temperatures aloft and at least enough moisture for a few clouds in the sky, particularly along about Monday. That should translate into daytime highs at least below triple digits for the first time in more than a week.

Obviously, we will be at or above 100 today and should be on Saturday. Sunday will be close and some locations may actually stay below 100. Monday looks to be the best shot at below triple digit temperatures along with at least a few clouds and perhaps even a few showers/storms, particularly for the more southern counties. Both of the longer range guidance products, the GFS and the ECMWF, have a weak QPF signal for this coming Monday. Don't want to get your hopes up too high, but there is at least a slim possibility.

After that, indications suggest the heat will be building back with at or above triple digits likely for the rest of next week. Beyond that, hard to say, but there is still time for a pattern change to take place. Interestingly, the hottest June on record and the June with the most triple digit days was back in 1911 and was followed by a relatively mild and wet July and August of that year…..so, there is still hope.