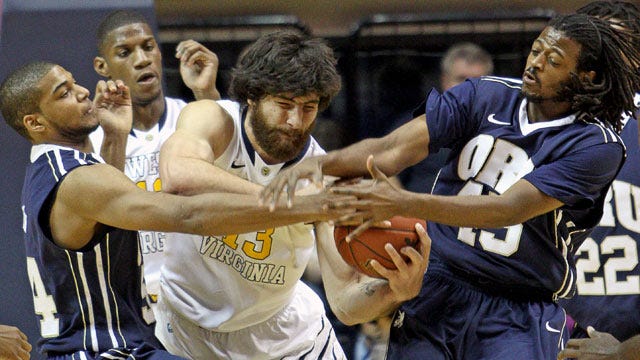 Oral Roberts made a late push, but the West Virginia Mountaineers were able to convert on chances late to hold off the Golden Eagles 78-71 to open the season.

ORU (0-1) played the contest close throughout, but found itself trailing 70-60 after a Deniz Kilicli dunk with six minutes left to play. However, the Golden Eagles would not go away quietly.

They rattled off six unanswered, including back-to-back from Michael Craion, to cut the lead to four points and force the Mountaineers to take a timeout. Out of the timeout, Roderick Pearson fouled Darryl Bryant and the senior guard knocked both down.

On the Golden Eagles' next trip down, Craion was fouled and converted on both attempts to cut the deficit to 72-68.

West Virginia missed on back-to-back three-point attempts, but Warren Niles wouldn't miss on his attempt and closed the lead to one point with 2:43 left on the clock. However, that's when the wheels came off for Oral Roberts.

The Golden Eagles came up empty on back-to-back possessions, while Darryl Bryant scored on a layup and back-to-back pairs of free throws to put the game away.

ORU's Dominique Morrison finished with a game-high 21 points, in addition to his six rebounds and five assists. Craion scored 18, grabbed nine boards and game up with six steals, while Steven Roundtree turned in a double-double with 11 points and 10 rebounds.

Oral Roberts will now travel to Stillwater to participate in the Dick's Sporting Goods NIT Tip Off, with a 9:30 p.m. game Tuesday against Texas-San Antonio.