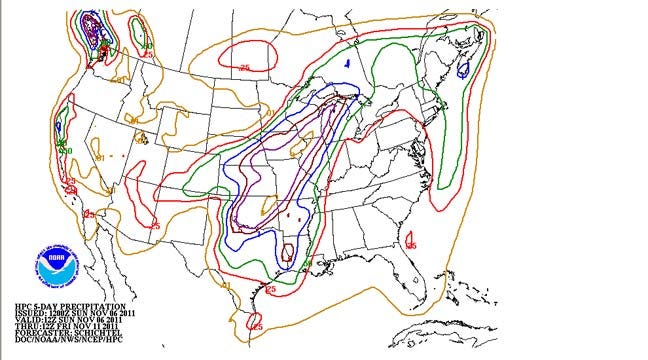 Guess it stands to reason that the earthquake last night was the strongest on record for our state at a magnitude of 5.6. This year has been a year of records for Oklahoma: we have recorded the coldest temperature ever, the most snow ever( for 24 hours and for a season), the hottest summer ever, and one of the worst droughts ever.....all during 2011 and the year is not over yet!

At least we are still cautiously optimistic about putting a serious dent in the ongoing drought situation. Notice the QPF map on the right which is showing statewide rainfall totals of up to 3 inches or more over the next several days. Our more desperate western neighbors also stand to get a decent soaking assuming this verifies.

Cloudy skies and brisk southerly winds will keep temperatures on the mild side for today, Monday, and Tuesday with daytime highs in the 60s to near 70 and overnight lows also near 60. Our rain chances will be on the rise with a 30% chance this afternoon increasing to 50% overnight tonight and you can pretty much count on periods of showers and storms for Monday and Tuesday. The cloudy skies and periods of rain will also limit the amount of instability that will be available for storms to develop. However, the strength of the dynamics in the winds at the surface and aloft should still produce some organized convection which will pose a threat of damaging surface winds or hail. So, there is a risk of some severe storms, particularly late Monday and again Tuesday afternoon.

The main cold front is expected to be pushing across the state Tuesday afternoon/evening and will be followed by clearing skies by Wednesday morning. The air behind the cold front will be cooler and we could see frost or a light freeze in some locations by Thursday morning. Southerly winds will quickly return though so the coming weekend should see a moderating trend. The next chance of rain after the current system now looks like it will hold off till early in the following week.