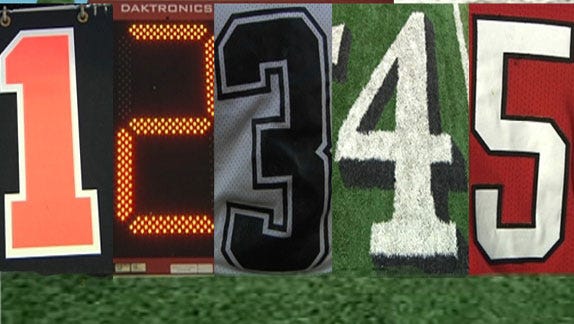 Bobby Lewis, The News On 6

TULSA, Oklahoma -- There is only one month left in this high school season. The time is now to make a push for the playoffs. Last week gave us a huge upset in 6A and a few setbacks for district hopefuls. This week, the chance to take a big lead in district races is there for a bunch of teams across every class. Here is a look at the Top 5 matchups from around the state this week:

The Bulldogs got their first taste of disappointment a week ago with the home loss to Vian. The Wolverines brought a potent offensive attack, not to mention some obnoxious train whistles, to Lincoln Christian and took an early lead in the race for 2As top team. This weekend, Lincoln has another tough test at Newkirk. The Tigers are undefeated and are coming off a 30-point win over Chouteau – Mazie. They have allowed just over 8 points per game this season.

Well, well, well. Look who's rounding into form. The Hornets were dead in the water after the first three games of the season. They were winless and struggling against some stiff competition. But, after winning three in a row, they are on top of the totem pole in 5A District 3. Since giving up 90 total points in the first three games, Darrell Hall's team has given up just 17 in its latest streak of wins. Bishop Kelley will need to figure out that energized Hornets defense. The Comets lost a heartbreaker on the road last week to McAlester, 28-27.

The Rams pulled the upset of, well, the past two decades a week ago with its last-second win over Union. Owasso marched 95 yards and scored a touchdown to beat the Redskins, 41-38. It was the first district loss for Union since 1997 (94-game win streak). The Rams are full of confidence now as the 6A District 4 frontrunners. They host the Pioneers and their hot-shot quarterback. Jerame Littell leads the state in passing with 2,092 yards and 23 touchdowns. The winner is the last remaining unbeaten team in the district.

Metro Christian travels to face its toughest test yet when the Patriots visit the Indians on Friday. Of Metro's opponents, only NOAH (270) has scored more points this season than Sequoyah-Tahlequah (241). The Patriots have scored in bunches this season. They've piled up 52 points or more in each of the past three weeks. Sequoyah-Tahlequah's only loss of the year came at home in Week 4 to an undefeated Verdigris squad.

If you like quarterback play, you'll love this matchup. Andrew Hearon (MCA) has thrown for 22 touchdowns this season, most in 3A, and Brayden Scott (S-T) has thrown 20.

The East Central Cardinals are a team with a flair for the dramatic. They've won four games by ten points or less, including squeaking by with a 14-10 win over Coweta two weeks ago, and a 16-13 overtime win over Central last Friday night. Pryor has not had any trouble winning games. They've won five in a row after dropping the season opener to Hilldale, 27-26. Since that night, the Tigers have outscored their opponents 152-39. The Cardinals were the early season favorites to win it all in 5A, but after barely beating out opponents with a combined 8-10 record the past few weeks, they would benefit greatly from a blowout win over the Tigers on Friday.