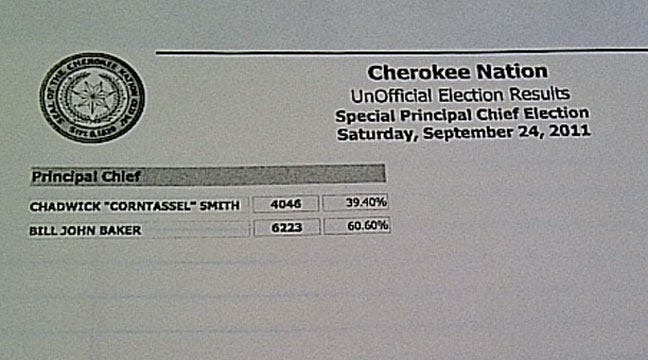 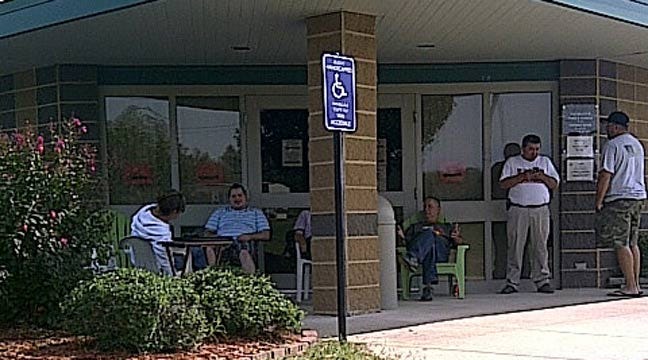 TAHLEQUAH, Oklahoma --  More than three months after the initial election, the Cherokee Nation is one step closer to knowing who its new Principal Chief will be.

Election workers are halfway done counting the votes from a special election. We want to stress these are unofficial, incomplete results.

Here are the numbers the Cherokee Nation released Sunday:

These are the early voting and walk-in voting numbers.

The tribe still has to count as many as 12,000 absentee ballots before we know who's Chief, and it's been a long journey to get to this point.

The precinct results are posted one by one. Campaign workers crunch the numbers. But the loudest sound are pens scribbling on paper.

"I don't know that anyone's going to run and scream to the top of the mountain that they won," said Bill John Baker, Principal Chief Candidate.

"We understand this time you wait until the end to declare a winner," said Chad Smith, Principal Chief Candidate.

Two days later, Chad Smith's campaign celebrates the official results declaring him winner. Then it was the Baker camp's turn to cheer again, when a recount reversed the outcome.

The Election Commission chairman resigned, and the Cherokee Nation Supreme Court stepped in to try to make sense of the numbers. A court-supervised recount called Smith the winner.

But it was so close, the Supreme Court threw out the controversial election results and ordered a special election to decide once and for all, who's chief.

The Carter Foundation has representatives in Tahlequah making sure this election runs smoothly.

"They don't assist, they observe," said Susan Plumb, Election Commission Chair. "And they're observing and doing their jobs as far as I can tell."

So far, election workers have counted more than 10,000 early and walk-in votes. That's about half the total ballots. They gave Baker an early lead but the mood is subdued.

"I think the Cherokee Nation is ready for a change in direction and ready to take the Nation from good to great," Baker said.

"The election commission has handled communications to the public much better, managed public expectations. And we understand now that when the first numbers are published, those are not the final numbers," Smith said.

Perhaps the two things on which both candidates agree: every vote counts, and don't celebrate too early.

Once again, these are unofficial and incomplete results that put Baker ahead. The tribe still needs to count as many as 12,000 absentee ballots in the coming days.