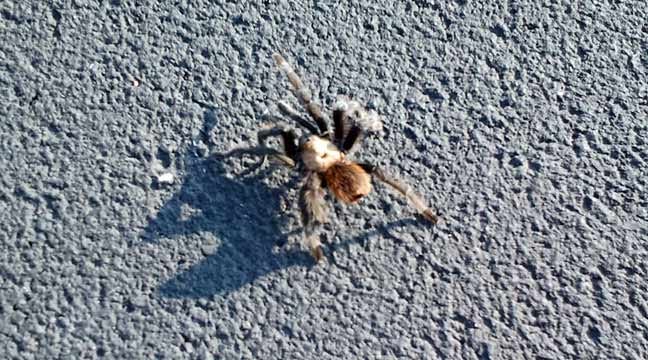 The annual tarantula migration usually begins in September, when tarantulas can be seen crossing roads in the mornings or evenings.

"When you have minus 21 degrees, then 60 to 100 days with 100-degree-plus temperatures, it really does tend to impact the insect population and therefore the spider population, too," since tarantulas eat insects.

Grantham says so far he hasn't heard any reports of this year's migration being unusual.  He has noticed the larger-than-normal numbers of grasshoppers and dragonflies.

They have large fangs and can stretch 5 inches from leg tip to leg tip, but Grantham says tarantulas are not considered a threat to humans because they're fairly docile.

Grantham says it's a myth that tarantulas can jump great distances.  He says at most they can jump a couple of inches.

Grantham says Oklahoma has just one kind of tarantula in the wild, which is commonly called the Oklahoma tarantula, though other states claim it, too.

He says another kind of tarantula, the Chilean rose hair, is commonly sold in pet stores and may be familiar to Oklahomans for that reason.

He says he's heard reports of up to 50 tarantulas per mile crossing roads in southwestern Oklahoma.  He doesn't expect numbers like those in northeastern Oklahoma.

No one knows why the spiders migrate, but it may be the males in search of mates.

Grantham says he's happy to identify any insect or arachnid you have questions about, just  send a photo of it to entoman@okstate.edu.

He's also preparing for the annual monarch butterfly migration, which should start at any time.