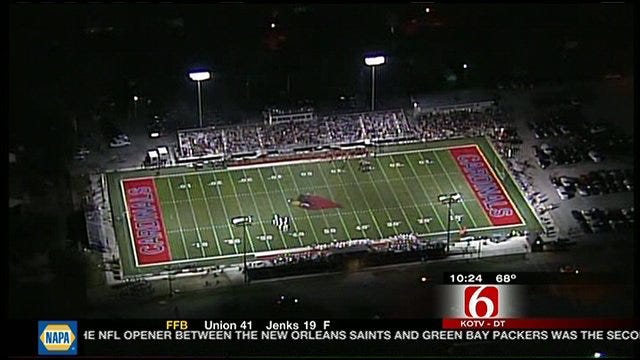 Catoosa ruined the Cardinals' first home game of the season with a dominant rushing attack. Levi Browning and Cole Scheulen led the way, and Catoosa finished with 377 yards on the ground. The Indians now are 2-0, while fell to 1-1.

In one of the best games of the night, Skiatook and Oologah battled back and forth from the opening whistle. The teams entered halftime tied 14-14, but Oologah scored two unanswered touchdowns to take a 28-14 lead going into the fourth quarter.

The Bulldogs answered quickly, scoring 14 unanswered points of their own to tie the game again with time running out. The seesaw battle continued afterward, with Oologah retaking the lead with a late touchdown. But the Mustangs missed the ensuing point, and that turned out to be the game's biggest mistake.

Skiatook took advantage of that mistake by driving 71 yards in only eight plays, finished by an eight-yard touchdown run by Cole Binkley. The Bulldogs converted the following extra point, and that turned out to be the game winner.