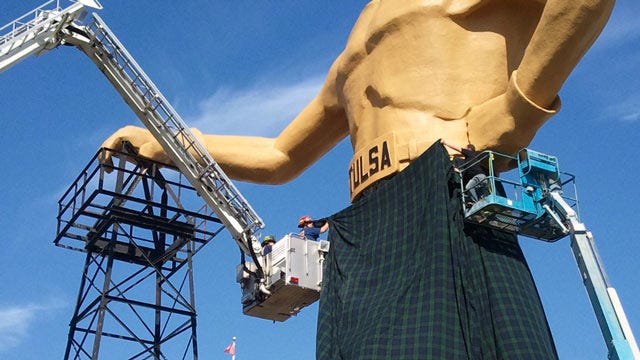 The event is part of a fundraiser for both the festival and two veterans charities, the Wounded Warrior Project and Help For Heroes.

The Scottish Festival is hoping they will be successful with Guinness World Records.

"The great thing about this record attempt is that the public played a major role in it, they got to be a part of the World Record attempt," said Steve Campbell, executive director of the Scottish Festival.

Check out slide show as they dressed the Golden Driller Friday morning.

The Golden Driller is robed in a Black Watch tartan which is used by Scotland's Black Watch or Royal Scottish Regiment, an elite military regiment.

The Golden Driller is located in the 4100 block of East 21st Street.

The 32nd annual Oklahoma Scottish Festival runs September 16 – 18, 2011, on the west bank of the Arkansas River in Tulsa.

For more information about the festival, visit their web site, http://okscotfest.com.