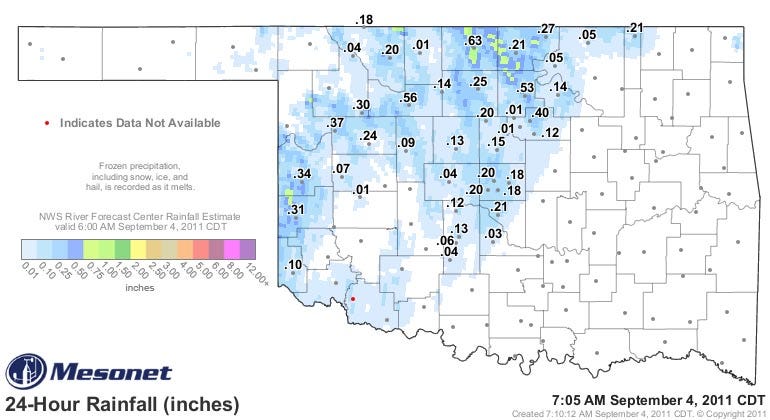 The long anticipated cool front has finally arrived, and the gusty northerly winds we will have all day long will gradually bring much cooler and drier air into the state. Unfortunately, this system was not much of a rain maker as the map on the right illustrates. This is the 24-hour rainfall map from the OK Mesonet. and although there remains a chance of some light showers through the morning hours, they will not add much more to the meager totals that have occurred so far.

By the afternoon, those showers will have dissipated or moved out leaving us with clearing skies later in the day and clear skies for the overnight hours.

The cooler air will be gradually filtering in so we still expect to be in the low-mid 80s this afternoon which is 10-15 degrees below where we were Saturday afternoon. North and NE winds of 15-25 with some higher gusts will also create a high fire danger situation as there has not been enough rain to provide any relief and those winds will bring lower dew point air into the state as well.

For tonight, clear skies and northerly winds diminishing to near 10 mph will result in a very cool start to Labor Day with most locations in the low-mid 50s by first thing in the morning. Sunny skies throughout the day and N to NE winds of 10-20 should result in the first day below 80 since back in May.

That will be followed by sunny, mild days and clear, cool nights for the rest of the week. In fact, some of the cooler valley locations could even see morning lows in the 40s for Tue and Wed mornings.

Barring any surprises, we still do not see any significant rain makers coming our way anytime soon. I say surprises because of Tropical Storm Lee along the Louisiana coast which is still meandering around. Most of the guidance has Lee eventually moving to the NE but there are also some indications that the upper level circulation may wobble around enough later in the week to perhaps bring a few more clouds our way. It would be a real surprise if it were to make a wobble this far west and bring some rain, but stranger things have happened.

So, enjoy the pleasant, cooler weather, stay tuned, and check back for updates.