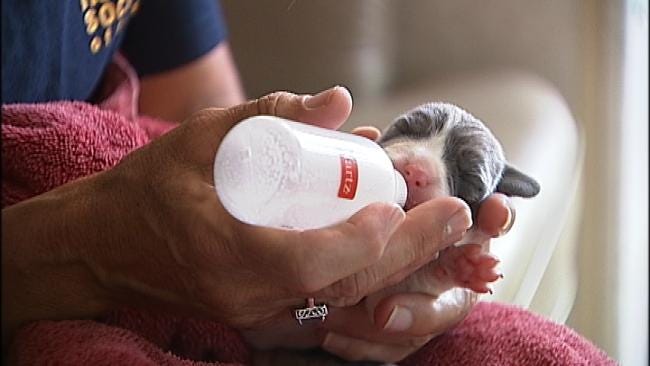 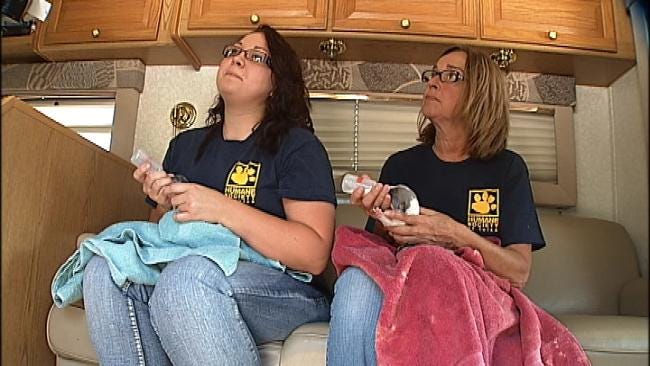 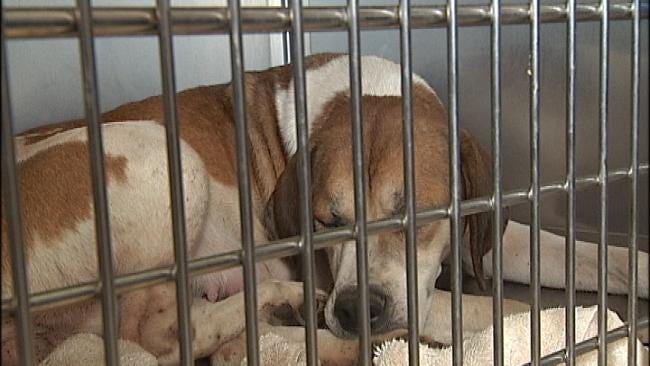 TULSA, Oklahoma -- Nearly 30 dogs are on Sooner Soil, rescued from a hoarder in Indiana Sunday.

The Humane Society of Tulsa was the agency chosen to help out, but with a huge pet over-population in Oklahoma -- should we be bringing more animals into the state?

The Humane Society of Tulsa rescued the dogs during the taping of the show, "Confessions: Animal Hoarding" on the Animal Planet channel.

The cry for help came all the way from Indiana and the Humane Society of Tulsa answered.

"We actually lost two of these puppies while we were out there, unfortunately, because they were just born and out in that heat," said Katelyn Williams, of the Humane Society of Tulsa.

Four rescue team members just returned with nearly 30 dogs, including several puppies, saved from what the team calls horrific conditions. The dog owner kept eight dogs, refusing to sign them over to the Humane Society of Tulsa.

"There was not a lick of grass anywhere; there was no food or water in sight. The animals were so hot, they were literally digging in the dirt, digging themselves holes to try to get down in the cool dirt," said Tulsa Humane Society employee Gina Gardner.

All the dogs were dehydrated and covered in fleas. The team started IV fluids immediately.

The Humane Society of Tulsa got involved because of this February episode involving a cat hoarder in Oklahoma.

It went well and so did another Oklahoma case that hasn't aired yet. Their reputation led to the Indiana dog hoarding case, as well as the HST's mobile transport unit. The RV, a private donation that was just refitted and completed last week, makes rescues easier.

But why bring more animals in when Oklahoma has a persistent pet population problem?

"We as an organization send a lot of animals to other states, and for us, these animals needed care. They were in a dire situation. We were asked to respond and that's what we do," Gardner said.

Gardner also says the show's production team company pays for all the animal care expenses, so the HST is not wasting any resources on out-of-state rescues.

While the dogs wait on a complete veterinary exam, they're getting the best sleep they've probably ever had.

The puppies are drinking a bottle every two or three hours and won't start eating on their own for another 3 1/2 weeks, which means volunteers will be busy.

The Humane Society of Tulsa invites you to their adoption center at 60th and Sheridan to find the dogs a good home. You can watch the episode involving those dogs this fall.