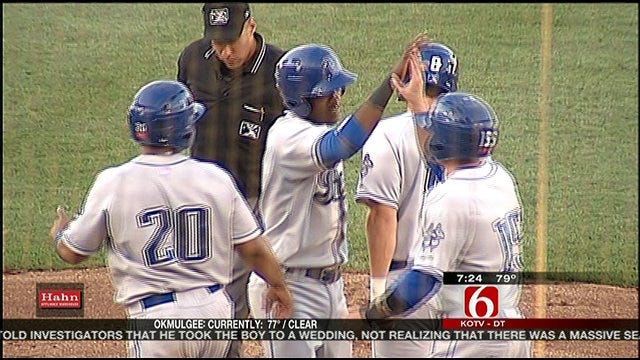 TULSA, Oklahoma -- The Tulsa Drillers picked up one of its biggest wins Monday in a wild game on the road against Northwest Arkansas.

Tulsa plated four runs in the top of the 10th inning to take the 13-9 win and move within one game of the Naturals in the North Division Standings.

Why was it such a wild win you ask? Well, Tulsa won the game despite giving up 20 hits and committing five errors for starters. The Drillers had a lead at three different points in the game and also blasted six home runs on the evening.

Mike Mitchell's three-run shot in the top of the 10th finally proved to be the game-winner, and one out later he made history. The Tulsa centerfielder belted his Texas League-leading 33rd homer of the season, the most in the history of the Drillers franchise. The home run moved Wheeler ahead of Kevin Buckley and Bubba Smith who both hit 32 in a season. Buckley had been atop the record books for 28 years.

Tulsa jumped out to an early 2-0 lead in the top of the first. Wheeler opened the game with a leadoff single, and he was still at first base with two outs. Wilin Rosario then belted his 20th homer of the season, an opposite field drive that gave Tulsa a 2-0 lead. With the blast, Rosario became only the second catcher in Drillers history to reach 20 homer runs in a season, joining Kevin Brown who hit 26 during the 1996 season.

The Naturals got on the board and tied the game at 2-2 in the third.

The Drillers went back in front with a three-run sixth. Rosario doubled with one out, and Sardinha drew a two-out walk. After a wild pitch, Michael Zuanich smashed his fourth home run of the season to give Tulsa a 5-2 lead.

The Naturals came back yet again in the bottom of the sixth with the help of one of the stranger plays of the night. Romak led off with a single, and Smith followed with grounder down the first base line that umpire Brandon Misun initially signaled was foul, but he then changed his mind and began pointing into fair territory. The fielders and runner had both stopped before resuming the play on the changed call. In the end, it was a double for Smith with Romak advancing to third. Paulo Orlando later followed with a single into right field that scored two runs.

Tulsa added three more runs in the top of the seventh. With two outs and the bases empty, Hector Gomez extended the inning with a double. Ben Paulsen followed with his 18th homer of the year to make it 7-4. Rosario then struck again with his second home run of the game to up the margin to 8-4.

But the Naturals refused to quit. Ben Theriot began the rally with a leadoff double and moved to third on a ground out. Following a run-scoring hit from Colon, Bianchi singled and Romak walked to load the bases. Smith pulled the Naturals to within two runs with a groundball single off the glove of second baseman Tommy Field. Myers tied the game with a two-run single that scored both Bianchi and Romak.

In the bottom of the ninth, Tulsa reliever Dustin Molleken retired the inning's first batter, but Bianchi then singled. With Romak at the plate, Bianchi swiped second base and advanced to third when Rosario's throw skipped into centerfield. Romak then tied the game again with a double over the head of Wheeler in center that scored Bianchi.

With the potential game-winning run at second, Molleken intentionally walked Smith before striking out Myers and retiring Orlando on a pop up to end the inning.

After losing their third lead of the night the Drillers caught a break when the top of the 10th began with an error by the Naturals. Tommy Field reached first on an error by third baseman Mario Lisson. After Field stole second base, Bronson Sardinha lined out, but Mike Zuanich drew a walk to put runners at first and second and setting the stage for Mitchell. With a 1-2 count, the Tulsa leftfielder lined a pitch from Ed Garcia over the left field fence for only his second homer of the season. The 3-run shot put the Drillers back in front 12-9.

One batter later, Wheeler upped the lead to four runs with his historic homer that cleared the fence in left-center field.

Stephen Dodson worked a scoreless inning despite surrendering a one-out single and committing an error on an errant pickoff throw. Christian Colon ended the 3 ½ hour contest by grounding out to Dodson.

The win was the seventh straight for the Drillers and moved them to within one game of the Naturals in the North Division standings of the Texas League with only seven games remaining in the regular season.

The Drillers now return to Tulsa for a 7-game home stand to end the regular season. First pitch is set for 7 p.m. Tuesday at ONEOK Field.