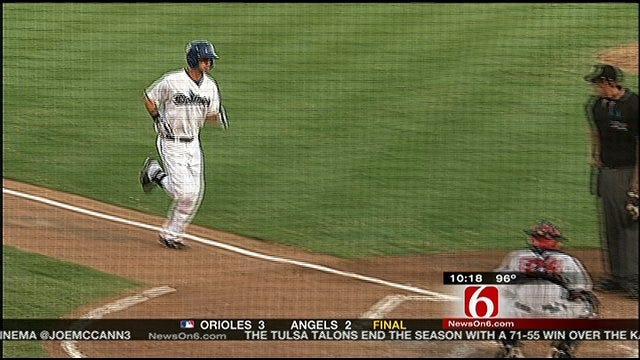 TULSA, Oklahoma – The Tulsa Drillers four-game win streak and four-game errorless streak came to an end Sunday night against Frisco. The Drillers made three costly errors, including two in the fifth, that Frisco capitalized on to win the game 6-2.

The game went scoreless until the fifth inning when the Riders got thing going. Mitch Hilligoss and Jose Felix opened the inning with back-to-back singles. Later, Jared Bolden laid down a bunt that catcher Wilin Rosario fielded and threw wildly to first, allowing Hilligoss to score the game's first run. Two batters later, Drillers shortstop Hector Gomez mishandled a grounder off the bat of Engel Beltre. On the play, allowing both Felix and Bolden came home to give Frisco a 3-0 lead.

Frisco added one more run in the seventh inning after reliever Casey Weathers took over for Scahill. Weathers walked the first three batters he faced to load the bases then Jonathan Greene followed with a run-scoring groundout that upped the Riders lead to 4-0.

Tulsa posted its first run in the bottom of the seventh when Rosario belted a solo homerun, his 19th of the season.

In the eighth, the pitching troubles continued for Weathers as he again walked the first three batters of the inning. Adam Jorgenson was summoned from the bullpen and he got a fly ball off the bat of Bolden, but Tim Wheeler and Brian Rike allowed the ball to drop in right-center field for a base hit that plated a fifth run. Another run-scoring groundout made it 6-1.

Mike Zuanich posted the Drillers final run of the inning in the bottom of the eighth. Zuanich drew a leadoff walk before advancing to third on an opposite-field double from Brian Rike. Zuanich scored on ground out from Mike Mitchell.

Tulsa's Scahill gave up six hits and three runs, but only one of the runs was earned. He walked one batter while striking out six and now sits at 9-11 on the year.

Ross worked seven innings, allowing only three hits and one run while striking out six.

Frisco and Tulsa return to the field Monday night at 7:05 p.m. for the final game of the series.