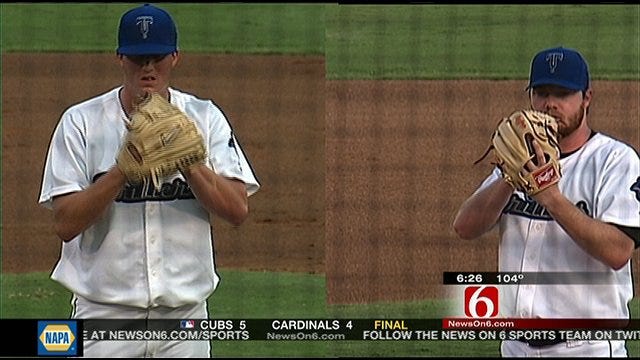 TULSA, Oklahoma – Trades in Major League Baseball often are a crapshoot. Struggling teams give up big names for a handful of prospects in the hope that one of them will become a star.

The Colorado Rockies did that at the trade deadline in July when they sent pitching ace Ubaldo Jimenez to the Cleveland Indians in exchange for four prospects – first baseman Matt McBride and pitchers Alex White, Drew Pomeranz and Joe Gardner.

"It's an honor that the Rockies think that much of me and Pomeranz and Gardner and McBride," White said. "It gives us an opportunity to show them that they didn't make a mistake."

White and Pomeranz both joined the Tulsa Drillers, Pomeranz as an up-and-comer rising through the organization, and White as part of his rehab from a tendon injury in his finger. The two pitchers started back-to-back games this week, and Rockies general manager Dan O'Dowd was on hand to watch both.

Neither pitcher disappointed. They combined to pitch 14.2 scoreless innings while allowing a total of five hits.

White's performance came in his fourth and final scheduled appearance with the Drillers. He improved over each of those four starts and is expected to be called up to either the Rockies or their Triple-A farm team in Colorado Springs.

"I'm excited for where I'm at now," White said. "It just took those four starts to really get back in the zone, get my legs right, get my arm in shape and be ready to pitch at a higher level."

O'Dowd liked what he saw from White Thursday, but still was cautious about White's health.

"He's a little further along, but obviously he hasn't pitched [in the major leagues] since April. He's still building arm strength and getting a feel for his delivery and his command."

Pomeranz was a No. 5 overall pick in last season's MLB Draft and has been shuffling between Single-A and Double-A all season. Baseball rules state a player cannot be traded within a year of his signing, which left him as a "player to be named later" in the Jimenez deal.

That caused Pomeranz's debut with the Drillers to be delayed, and he was forced to pitch simulated games for two weeks. He finally made his first appearance with Tulsa Wednesday and showed no signs of rust.

"It was good to finally get back out into some competition," Pomeranz said. "I've been throwing to hitters that aren't allowed to swing for the past two weeks. It's not exactly very fun."

Both Pomeranz and White showed flashes of what made them such prized prospects, and the Rockies hope they can become future staples in their rotation.

"We like the upside," O'Dowd said. "Like any trade, you don't know until you're a few years down the road and see how these young men mature in their careers."