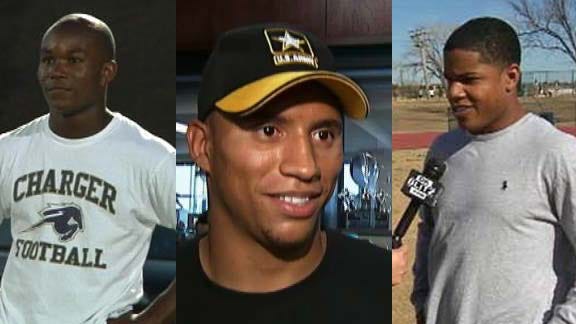 The rankings list features the top high school football recruits across the nation all on one list and the competition is fierce.

Sanders took the top ranking for players from Oklahoma at No. 121 followed by Ross at No. 183 and Shepard at No. 220.

All three are listed as four-star recruits by Rivals.com and we break down each player below:

No. 121 Barry Sanders Jr.
Sanders, a senior at Heritage Hall missed five games last season after straining a ligament in this right foot. The five-foot-eleven-inch running back had surgery in December and has since been rehabbing the injury.

With offers from more than fifteen schools across the state, Sanders is one of the highly sought after backs in the nation. In 2009 he rushed for 1,707 yards and tallied 22 touchdowns.

No. 183 Alex Ross –Jenks
The Trojans’ running back finished last season with 1600 yards on 125 carries and has already accepted an offer from the University of Oklahoma.

Ross’ season took a surprising turn when teammate and starter Zack Langer suffered an injury and catapulted Ross from defensive end to starting running back The soon to be senior is also a standout in track, competing in the 6A 100- and 200-meter dash.

Another product of Heritage Hall, this wide receiver recorded 28 touchdowns for the Chargers last season and helped them to a state championship as well.

The wide receiver stands at 5-foot-11-inches and weighs 170 pounds and has also committed to the University of Oklahoma. He averaged 20.1 passing yards per game last season as a junior. On offense, he tallied more than 1500 total yards; on defense, he recorded 103 tackles and eight interceptions.

Overall, Rivals.com boasts Springfield, Missouri’s Dorial Green-Beckham as the number one recruit in this year’s class. As a junior, Green-Beckham caught 78 passes for 1,706 yards and 15 touchdowns, averaging 21.87 yards-per-catch.

View the complete Rivals250 at Rivals.com