Stuart Escapes Upset by One Point 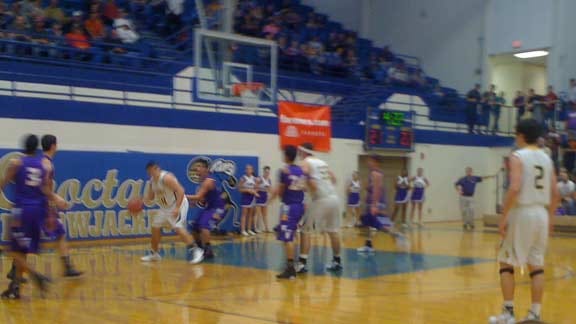 CHOCTAW, Oklahoma – A last second attempt by Weleetka bounced off the top of the backboard as the final second ticked off the clock, securing Stuart’s advancement in the Class A boys state tournament.

Stuart’s perfect season was put in jeopardy in the third quarter, when Weleetka stretched their lead to more than 10 points. The Hornets’ once composed sense of play quickly morphed into a panicked pace. It seemed like Stuart had exhausted their offense by half.

Meanwhile, Weleetka’s Kyle Bencoma and Montana Gormly came to life for the Outlaws. Bencoma confidently set the tempo, slicing his way to the basket, past the two big men on the inside – Stuart’s Bo Mabray and Colten Chapman.

With their post-season hopes being dashed by the speed and tenacity of the Outlaws, the Hornets muscled their way back into the game, narrowing the margin to just four points with three minutes left to play.

After leaving the game just a few minutes later, fan favorite Bencoma returned to the game as the student body erupted with approval.

Chapman tied the game at 21 with just 1:30 left on the clock when he hit a fade away layup, and the Hornets took a narrow two-point lead after a breakaway layup on the next play.

Weleetka’s Caleb Smith hit a three to bring the score back in the Outlaws favor, 45-44, but a set of free throws once again put the Hornets ahead 46-45.

Kyle Bencoma brought the ball down court, passing it to Shaun Bencoma, who dished it to T-Ray Lucas. The junior bobbled the ball and committed a foul as players from both teams scrambled for the loose ball.

A last-chance shot by Kyle Bencoma bounced off the top of the backboard as the Stuart Hornets claimed the victory.

The Hornets will advance to the Big House to face the winner of the Merritt/Cheyenne game.

Stuart Escapes Upset by One Point