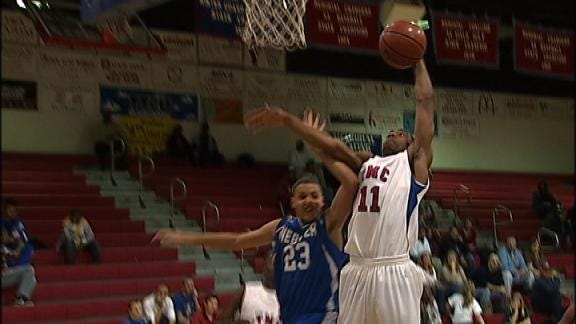 TULSA, Oklahoma – The second player in our Green Country Conference Top 5 series is Memorial senior guard Dahquan Royal. He’s one of the Chargers captains and he takes that role seriously.

“I just like to help the underclassmen get better”, Royal explained. “[I try to] make them play hard, yell at them a little bit just to get them going.”

“He brings a lot of experience to our team,” said Memorial head coach Eric Savage. “When we’ve needed big shots this year in some tough games, he’s been able to get it done for us.”

He’s averaging about 16 points per game, but his three point percentage really stands out . . . he hits almost fifty percent of the “3’s” he shoots.

“He can stretch the defense so far because he’s got range well outside the three point line,” Savage said. “If you get up and play him tight, he has the ability to drive to the basket.”

And Dahquan Royal is a winner.

Head coach Eric Savage has won two state championships in his time at Memorial; Dahquan was on the 2008 team that won it all.

“Well, it gave me a lot of experience,” Royal recalled. “Playing against a lot of great players, practicing against [the 2008 team] . . . it was just a wonderful experience being able to practice and play against those players.”