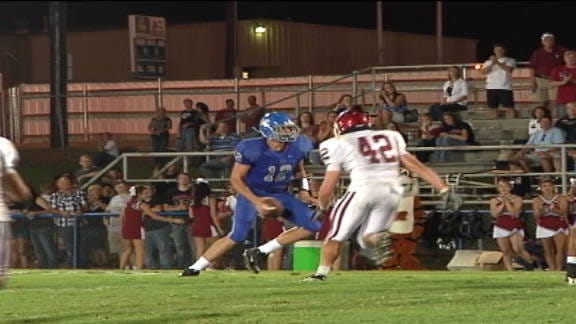 BLANCHARD, Oklahoma -- One of the more intriguing district opening matchups came from District 3A-1, as the high-powered Bridge Creek Bobcats and quarterback Ryan Spangler – No. 28 on the Oklahoma Sports Top 30 – hosted the defensive power Tuttle Tigers.

It was a defensive battle for the opening 24 minutes of the game.

After Tuttle strung together a long drive, taking the ball down to the Bobcats’ one yard line, quarterback Tanner Koons fumbled on the goal line to end the threat.

Bridge Creek threatened late in the first half, but the Tigers’ defense clamped down when the Bobcats moved to their half of the field. Going for it on 4th and Long, Spangler’s pass was low to turn the ball over on downs with less than 20 seconds on the clock.

However, Bridge Creek’s offense came alive in the second half putting up points on its first opening drive. Spangler connected with Joshua Pershica for a five-yard touchdown to take a 6-0 lead.

Spangler and Pershica hooked up again early in the fourth quarter to score on a 25-yard screen pass to take 12-0 lead.

Spangler finished the game with 174 yards and two scores on a 15-of-24 passing performance.

Koons responded for Tuttle with a 33-yard touchdown pass to Brody Sims to close the gap to one score, but couldn’t complete the comeback.