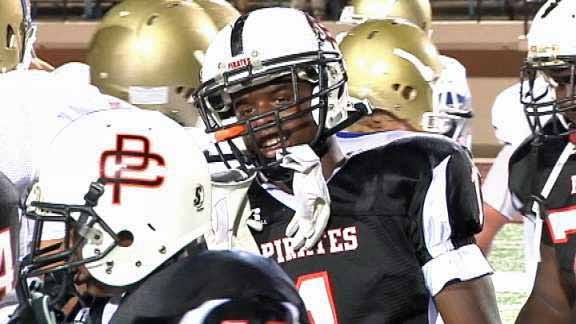 OKLAHOMA CITY – The Putnam City Pirates improved to 3-0 for the first time since 2007 Thursday with a 42-22 victory over the Choctaw Yellowjackets.

PCO (3-0) running back Casey Curtis was the star of the night, finishing with 230 yards and three touchdowns on 25 carries.

When the Pirates were up 7-0 in the second quarter, Choctaw (1-2) quarterback scored on a two-yard bootleg. But PCO blocked the ensuing extra point to keep the lead intact, and that was the closest the Yellowjackets would come.

After a short touchdown run extended the lead, Curtis busted a 64-yard touchdown to stretch the advantage to 21-6. It was all smooth sailing from there.

The Pirates’ three wins to begin the season tie the same number of wins they recorded all of last season. The last time PCO started the year 3-0 was also the last time it won a playoff game.