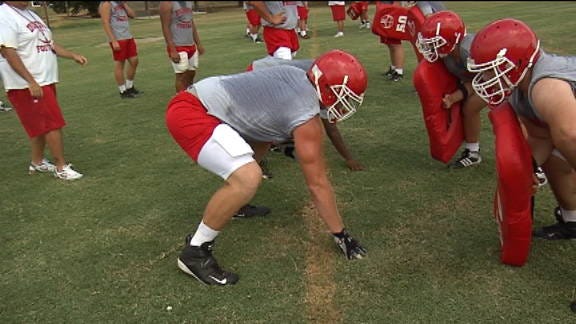 But you also can’t teach size to move with the speed and gracefulness of a basketball player.

At 6’8, 300 pounds, Duncan offensive lineman Dylan Dismuke was blessed with nice specifications for a college lineman, but Duncan coach Jim Holloway said the difference with Dismuke is how he uses that size.

“His ability to move and run is something that really sets him apart from a lot of the other kids,” Holloway said. “Obviously the size is a big recruiting factor, but his skill level has really improved and his speed and quickness is good.”

His combination of size, speed and skill was enough to earn him offers from plenty of Division I schools, including Oklahoma, Oklahoma State, Arkansas, Missouri, Texas Tech and Ole Miss.

But in the end, Dismuke had his heart set on one school.

“OU has been pretty much a dream team for me my whole life since I was a little kid,” Dismuke said. “I went up there and after getting to see all their workouts and all that it felt like my heart was telling me to commit, so I did it.”

Dismuke began shooting up the recruiting charts last year and is currently ranked as the No. 21 tackle in the country and the No. 3 overall player in Oklahoma by Rivals.com.

But before he takes his game to OU, Dismuke will anchor the line as one of four returning starters for the Duncan Demons.

The Demons have talent returning all over the field as well and are one of the favorites this year to make a run at a state title in 5A.

Dismuke said he is excited for college, but his senior season is shaping up exactly as he hoped.

“I’m so fired up for it,” he said. “My whole three years I’ve been coming through here, my dream was to have a top team like this in high school and be able to go to OU after it, but I’m ready to win a state championship.”