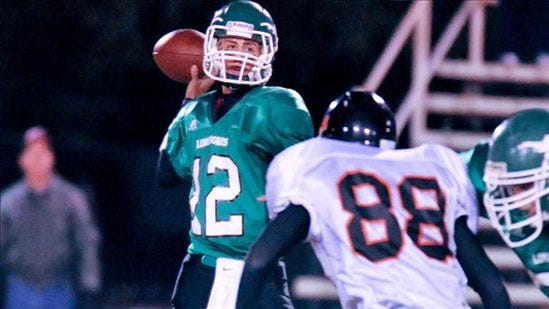 Quarterback Daxx Garman, who was ruled ineligible last year at Jones High School, made news again when he was denied eligibility to play at Southlake Carroll High School by Texas’ District 7-5A executive committee recently.

Garman’s eligibility was called into question in a news report by WFAA in Dallas, stating that his parents still maintained residency in Oklahoma.

The University Interscholastic League, which governs Texas high school sports, states that athletes may not transfer to a high school for athletic purposes without establishing a residency in the district.

The UIL rules that a resident's former home they are moving from must be on the market or sold with no personal effects left in the house.

The WFAA report found online photos of the Garman's home in Oklahoma, reportedly showing many personal effects of the family still left inside.

The district committee reviewed the case for three hours and denied Daxx Garman eligibility with a 4-3 vote.

An attorney for the Garmans told WFAA News 8 they plan to appeal the decision.

After playing eight games for Jones in 2009, Garman was ruled ineligible, forcing Jones to forfeit six games and miss the playoffs.

He previously attended Carl Albert High School before moving to Jones High School without a necessary waiver. He applied for a waiver afterwards and was denied.

Garman committed in February to play college football at Arizona.