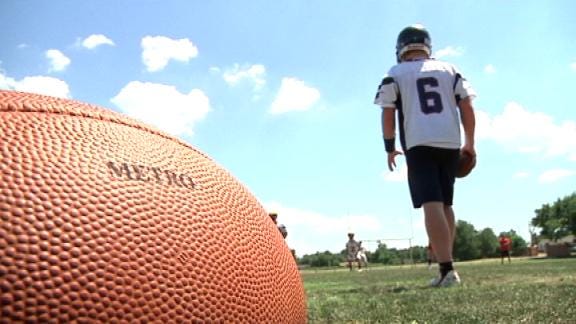 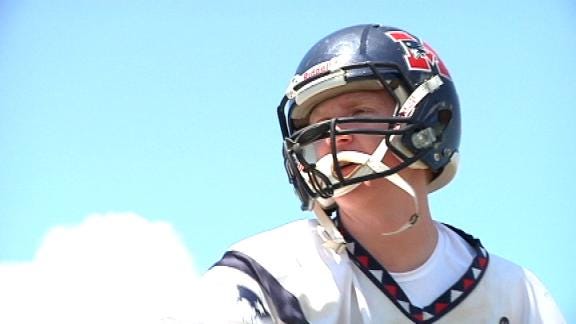 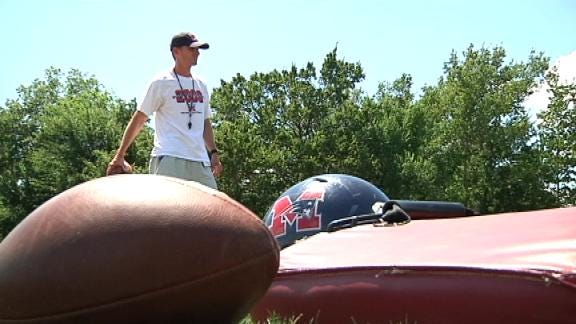 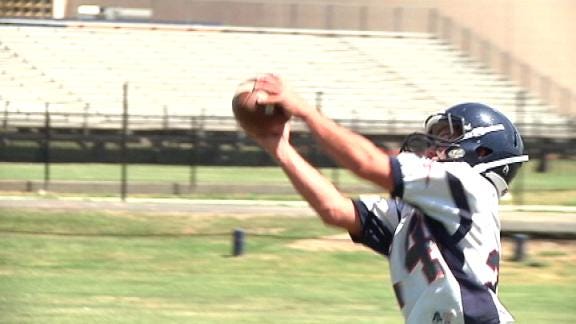 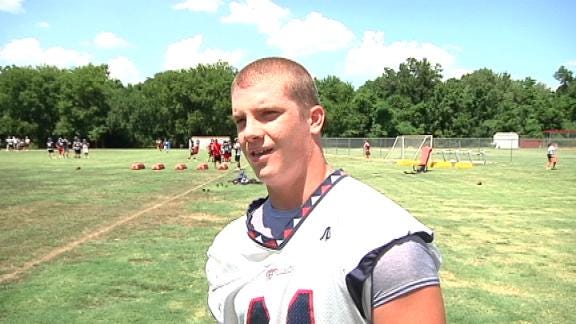 TULSA, Oklahoma— Last season, the Metro Christian Patriots looked well on their way to the 3A gold ball trophy. The Patriots had a perfect regular season and dominated at home. Metro Christian scored 42 points per game.

Things looked great for the Patriots until the first round of the playoffs. The Dewey Bulldoggers weren’t scared of the top-seeded Patriots. Two botched snaps late in the game by Metro Christian sealed their fate as the team failed to move on in the playoffs.

That devastating 28-21 loss was still fresh in the minds of the players as the team opened practice in 2010.

“We have the article still up in our locker room,” junior quarterback Andrew Hearon said. “It hurt. It really makes you think week in and week out, anyone can beat you.”

“It was disappointing, we had a great group of kids on the field,” head coach Jared McCoy.

The Patriots will look to move on from the disappointing end to the 2009 season and gear up for another playoff run. Hard work and perseverance have been the focal points for this team during workouts.

The Patriots are coming off a year of high-powered offense and strong, hard-nosed defense. The senior class brought that toughness last season. Now, those leaders are gone and a new group steps in to take the reins. The roster is inexperienced, but McCoy is confident in his team this upcoming season.

“They don’t have a lot of playing experience because last year’s group was so talented,” McCoy said before practice. “We’re interested in getting all of those parts in the right places. It’s a coach’s dream. We’re going to take what’s already good and try to make it better.”

One of the anchors of this new Patriots team is Hearon, who looks to take over for Beau Marsaln. He is the favorite for the starting quarterback position this year and could be a potential two-year starter. Metro Christian hasn’t had one of those in four years.

“Andrew Hearon stepped in for us last year and filled in for Beau when Beau was injured,” McCoy said.

The Patriots will look to their new signal caller as a leader on the field. Hearon says he feels up to the challenge this fall.

“The quarterback’s always the leader on the field,” Hearon said. “It’s the number one thing you have at that position. It’s vital that I lead the team.”

McCoy says one of the strengths for the Patriots this year will be their defense. The team returns several starters including seniors Caleb Jackson and Joe Wolfe. Jackson is a transfer, who has started three seasons in 2A and will anchor the defensive line. Wolfe plays middle linebacker and McCoy says he is a player “who can really fly.”

The players feel they are championship ready, but are trying not to let that dream go to their heads and effect their play.

“You’re not going to hear me say we’re going to win state,” Wolfe said. “We have the talent. We have the depth. We have the hard work. All of those are a making for a championship team.”

The Patriots will use the 2009 season as motivation to try and earn their 11th straight postseason berth and make another run at a gold ball. McCoy says that his team wants that state championship, but they also want to improve on last season.

“They’re not one of those groups that’s just saying we want to win state,” McCoy said. “I know they do, but they want to do better than last year. They want to advance in the playoffs as far as hard work can take them.”

PLAYOFFS: Lost to Dewey at home in the first round of the 2009 postseason.

BEST PLAYER: Joe Wolfe. The senior plays middle linebacker and his coach says he intimidates opponents with his size. Wolfe is 6-foot-2, 220 pounds and is immediately noticed by the other coaching staff.

BIGGEST GAME: Week 10, November 5th vs. Claremore-Sequoyah. This game has the potential to name the top seed in 3A going into the postseason. Both teams have excellent talent on all sides of the ball.

ANDREW HEARON ON THE KEY TO WINNING THE DISTRICT: “Just going out and winning games we should win. If we take care of our home games, we should win our district. We got everyone coming here. Tahlequah-Sequoyah, Claremore-Sequoyah are coming to our place this year. We got to win at home.”