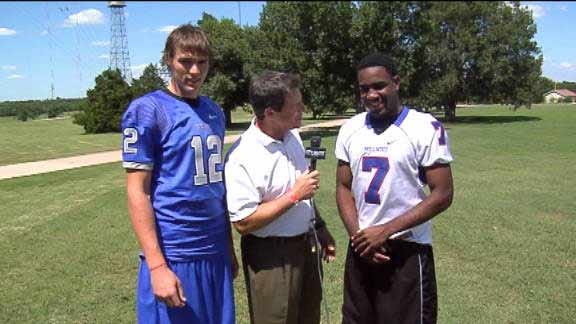 OKLAHOMA CITY -- Five of the top high school quarterbacks were in Oklahoma City for a photo shoot for Coaches Aid Magazine and they stopped by the Oklahoma Sports studio and spoke to Sports Director Dean Blevins.

Kevonte Richardson, quarterback for the Millwood Falcons, is the sixth-ranked prospect in the state. The 6-foot-3, 195-pound dual-threat quarterback has not made a commitment, but currently the Missouri Tigers lead the race for his services.

Oklahoma commit Kendal Thompson is also featured in the photo shoot. The No. 4 Oklahoma prospect led the Sabercats to a state semi-final appearance with 2,793 yards and 29 passing touchdowns.

L.T. Pfaff may be from a small school, but produced big numbers in his junior season. The 5-foot-10 quarterback passed for 331 yards and three touchdowns per game last season for Atoka.

After overcoming a head injury in the Class 2A State Title game, Derek Patterson joined the group of the top quarterbacks in the state. The Kingfisher signal caller led the Yellowjackets to a 12-3 record and hopes to replicate his success in 2010.

Ryan Spangler, the 6-foot-7 signal caller for the Bridge Creek Bobcats. The two-sport star has is being recruited by Tulsa, Oklahoma State, Oklahoma and Kansas.