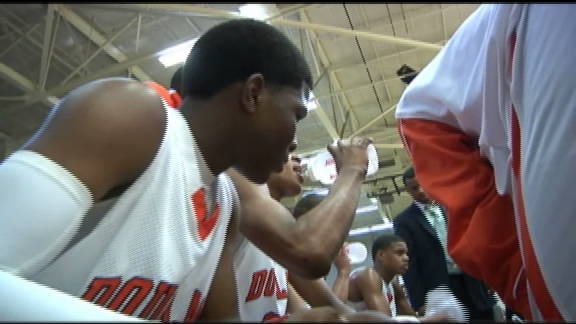 OKLAHOMA CITY -- Top-ranked and undefeated Douglass knocked off Woodward 78-66 to remain perfect and punch their ticket to the state semifinals.

In front of a standing-room only crowd, Woodward who has not won a state tournament game since 1976, kept the game closer than most expected.

Woodward remained in the game most of the way, in thanks to junior sharp shooter Seth Heckart, who finished with 26 points on seven 3-pointers. Heckart had 18 points on six threes at halftime as the Boomers were down 38-34 at half.

Heckart cut it to 60-59 on a driving layup with 3:20 left in the game, but Douglass freshman Stephon Clark led Douglass on a run to put the game out of reach for Woodward.

Clark finished with 21 for the Trojans, Romond Jenkins added 19 and Dorrian Williams chipped in 14.

Douglass advances to the semifinals and will face McLain, Friday at 4:30 p.m. at the Fairgrounds.