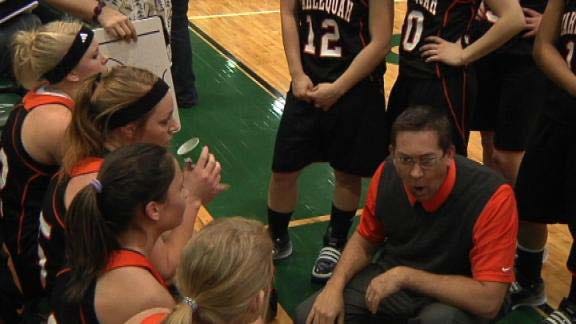 CATOOSA, Oklahoma – Bixby opened the game on a 15-0 run but struggled to a 41-38 win over Tahlequah in Thursday’s 44th Annual Catoosa Port City Classic opening round.

The Lady Spartans got clutch free throws in the closing seconds to preserve the win. Brittany Harris scored ten points for Bixby. Lauren Robertson led the team with 13 points.

Lady Tigers head coach Chad Walker pleaded with his team during a first half timeout to start rebounding the basketball and pushing the ball up the floor off missed shots. His team responded to start the second quarter with a 12-2 run thanks to big baskets by Gentry Blankenship and Erica Sampson.

The Lady Tigers cut the Lady Spartan’s lead to just two points heading into the break, but Bixby came out strong to start the second half. After the break, the Lady Spartans looked a lot like the team that started the game off hot on offense. Bixby scored six quick points and increased their intensity on defense.

What looked like a possible run-away game, turned into a nail-biter in the second half. Tahlequah weathered the early Lady Spartans push. Blankenship hit a clutch three pointer to tie the game at 26 inside two minutes to play in the third quarter, and Tahlequah trailed 31-30 heading into the fourth quarter.

The win puts Bixby in the winner’s bracket. They will play Claremore Friday at 4 p.m. Tahlequah will play Bartlesville at 1 p.m.