Memorial's Anderson Leading on Court and in Classroom 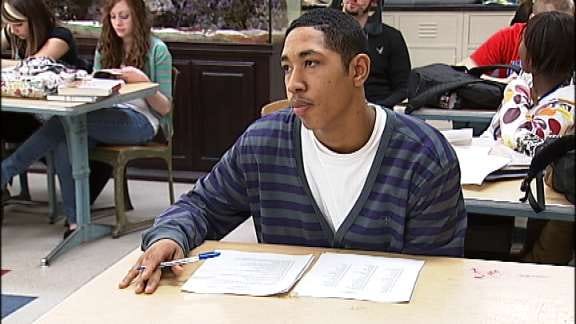 TULSA, Oklahoma -- It's sharp skills and smarts that makes Adrian Anderson one of the go-to players for Memorial.

Anderson was at Booker T. Washington his first two years and decided to transfer when he didn't see eye-to-eye with new coach Shea Seals. He had a short stint at Sand Springs, and then came to Memorial last season. It was a trying time, but he's finally found a home with the Chargers and now Booker T. is a bitter rival.

"One rule I learned here once I got to Memorial was the coaches told me, 'You're not an official Charger until you beat the Booker,'" Anderson said. "It's going to mean more this year. It's my senior year and I'm one of the captains and I hope to lead us to victory."

Perhaps the biggest sign of Anderson's perserverance came on the ACT. He scored a 19 the first time, a 23 the second and most recently turned in a 29. It has opened up both academic and athletic opportunities for the Memorial senior.

"I don't know, it seems like when a challenge comes my way now I am able to just put it behind me and keep pushing," Anderson said.

While schools are starting to look at Anderson's his high marks in the classroom and on the basketball court, he's already begun practicing his future profession - being a lawyer.

"I'm a very arguementative person - you can probably see it on the court - on the court, in practices coaches can tell you," Anderson said. "I have my little mood swings, but it's just part of what comes with it."

Memorial's Anderson Leading on Court and in Classroom