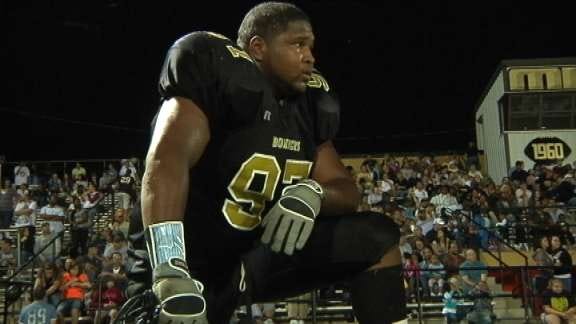 Midwest City defensive tackle Dominique Jones has decommitted from Arizona. Jones originally committed to the Wildcats Dec. 11, 2009, but says his late commitment may have hurt him.

“He [Arizona tight ends and running back coach, Seth Littrell] told me I should keep my options open,” Jones said. “Recruiting is a business, I dropped the ball and I just have to wait now.”

Jones is rated the No. 22 prospect in the state according to Rivals.com. He said he has offers from Kansas, Kansas State and Tulsa among others. Jones will visit Kansas State Jan. 15 and visit Baylor on the 22nd.

Jones said the recruiting process has weighed heavily on him, but he does see a light at the end of the tunnel.

“It’s been stressful, but it’s going to get better soon.” Jones said. “I’m going to both schools with an open mind. It’s pretty much me feeling like I’m at home. If I do, then I’ll make my decision.”

Jones said he expects to have a decision before signing day. Things are heating up for teammate Emmanuel Maxwell also.

Maxwell does not have an official ACT score yet but is scheduled to take the test Jan. 11. The linebacker is rated the No. 24 prospect in Oklahoma according to Rivals.com. He said he holds offers from Tulsa, Colorado State and Arizona, however, a lot hinges on his ACT score.

“You can’t do too much unless you have an ACT score down,” Maxwell said. “It’s been pretty quiet lately. I’m just getting ready for my ACT, it’s been pretty hectic.”

The Bombers duo said they would like to be a package deal, but their decisions will not hinge on playing with each other at the next level.