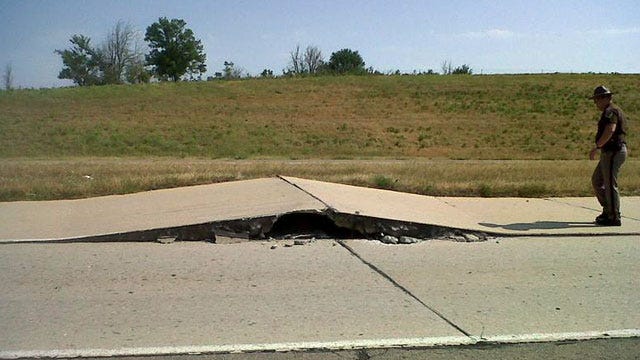 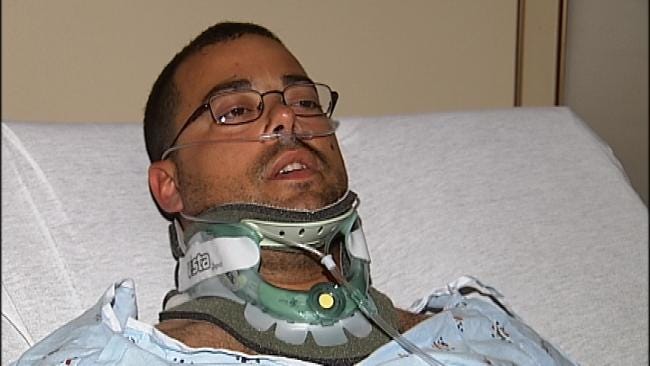 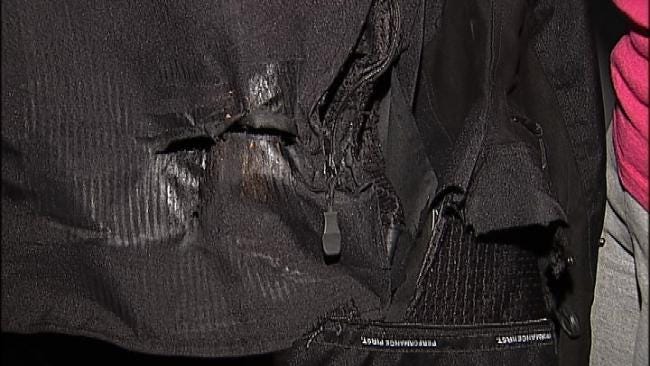 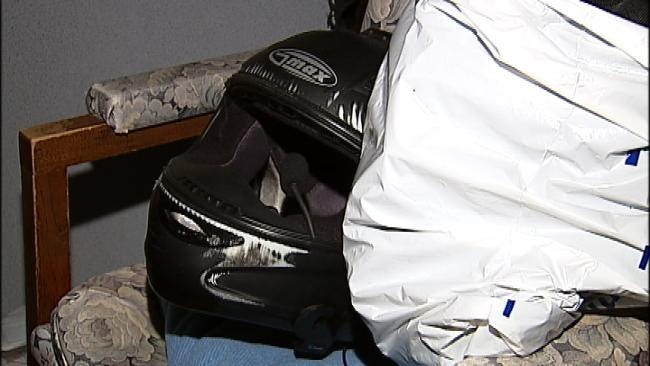 TULSA, Oklahoma -- An Oklahoma motorcyclist wants other riders to learn from his example.

Chason Lewis flew hundreds of feet in the air Sunday when his motorcycle hit a section of road that had buckled under the heat. Lewis says the only reason he survived is because of his protective gear.

Chason Lewis was on his way home from getting a certification for scuba diving. His Honda sport bike hit a ramp that had formed in the road and Lewis went flying over the front wheel.

"I remember landing on my face, I remember seeing the pavement," he said.

Chason Lewis survived a terrifying accident. He's now recovering at St. John Health System with a number of injuries, from a leg separated from his hip to a severely injured back.

"I guess my C5 vertebrae is fractured," he said.

Lewis was riding his motorcycle Sunday afternoon westbound on the Cimarron Turnpike. It was at mile marker 39 when he came across a two foot high ramp caused when the highway buckled under the intense heat.

"As soon as the front wheel touched it I didn't have any time to react," he said.

Lewis' motorcycle flipped rear wheel over front wheel hurtling him 30 feet into the air and 150 feet down the highway. He slid on his hip another 200 feet after he landed...but he survived.

"The helmet and the jacket and pants tell it all," Lewis said.

Lewis credits his Kevlar laced protective gear for saving his life. You can see the holes caused by the friction of the highway and his helmet shield is gone after it shattered when he landed face first.

"I've seen a lot of people with sunglasses only and I don't think they realize how slow they can be traveling and how much damage they can do to their body," he said.

Lewis says he's the perfect example of how protective gear can be the difference between life and death. He hopes other riders think of him the next time they hit the open road.

"Sunglasses might look cool but they won't stop your face from getting damaged when it meets the highway because I physically seen the highway come up and hit my face," Lewis said.

Lewis is still going through a battery of tests, but he expects to be released from the hospital later this week. He says he's looking forward to getting back on his motorcycle and back into his body armor.