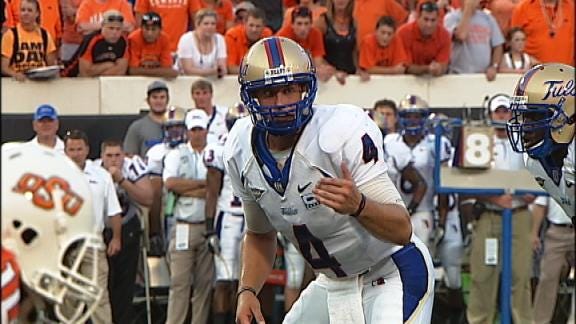 TULSA, Oklahoma -- If the Golden Hurricane football season is anything like the year the Dallas Mavericks just completed, Bill Blankenship's first year as the man in charge is going to be one to remember for TU fans.

Tulsa's head coach compared quarterback G.J. Kinne to Mavs' guard Jason Kidd last week because the two have seemingly limitless options when it comes to who to get the ball to.

"GJ is a guy that can distribute the ball, and he can score himself," Blankenship said.

Kidd dished to Dirk Nowitzki and Dallas won the NBA championship. Kinne will have plenty of chances to chuck the ball to his ‘Dirk' in receiver Damaris Johnson. The duo connected on 56 passes a year ago and also combined for 1,121 yards on the ground.

"I think it's the perfect combination in the quarterback is a guy that wants to get it to his guys but also wants to do something with it himself," Blankenship said.

Johnson scored 17 total touchdowns as a junior a year ago. Alex Singleton scored 11 times. The options are there for the Golden Hurricane quarterback to put up even bigger numbers as a senior.

Tulsa opens the regular season against the Oklahoma Sooners in Norman on September 3rd.