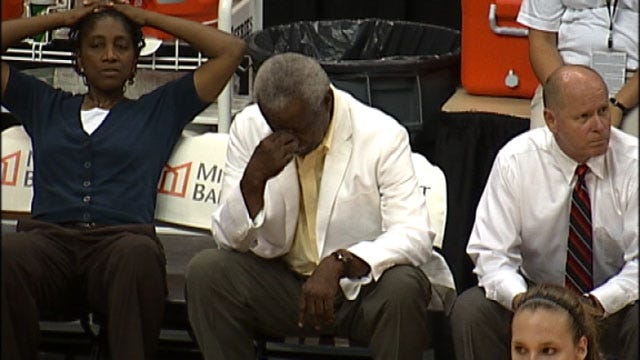 TULSA, Oklahoma – The Tulsa Shock nearly mounted a huge fourth-quarter comeback, but came up short in an 86-78 loss to the Phoenix Mercury Friday.

The Shock (1-10) trailed by 16 points at the end of the third quarter and had been outscored in every frame, so its hopes seemed slim. But the Mercury (7-4) suddenly went cold on the offensive end, scoring just two points in the first six minutes of the fourth quarter.

That allowed Tulsa to go on an 11-2 run to suddenly cut the lead back to single digits. But by that point time was running out, and the Mercury strung some baskets together to hold off the comeback despite only scoring 10 points in the fourth.

Diana Taurasi led all scorers with 17 points for Phoenix, while teammate Penny Taylor scored 16. Elizabeth Cambage continued to play well for the Shock, leading the team with 16 points in just 14 minutes off the bench.

Tulsa continued its trend of difficulties on the offensive, shooting just 33 percent from the field and going a measly 3-of-23 from beyond the three-point line.

The Shock now has lost five consecutive games for the second time this season. Its one win came sandwiched between those two losing streaks.

Friday's contest marked the first game in a weekend home-and-home, as the Shock and Mercury will both travel to Phoenix to face off again at 5 p.m. Sunday.