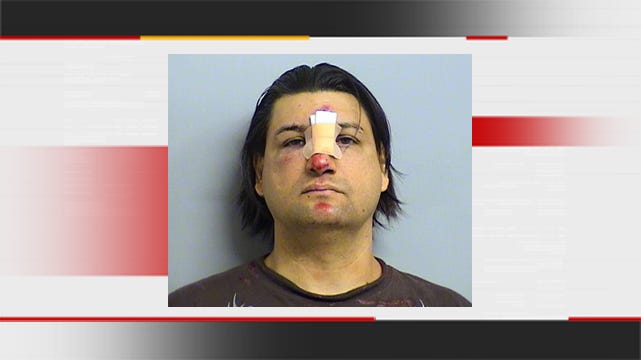 BROKEN ARROW, Oklahoma -- A Sapulpa man was arrested after police say he tried to avoid a 4th of July checkpoint at about 2 a.m. Saturday. Aaron Ray Fox, 37, was booked on complaints of driving under the influence, running a road block, resisting arrest and improper U-turn.

Tulsa police say Fox was driving towards a checkpoint near Admiral and Lynn Lane in Broken Arrow and made an illegal U-turn after seeing the Oklahoma Highway Patrol vehicles. Officers pulled Fox's vehicle over.

A passenger in the car told police that Fox had more than two pitchers of beer to drink.

The arresting officer said as he attempted to put handcuffs on the Sapulpa man, Fox struggled, trying to pull his arms away. Officers had to take Fox to the ground to handcuff him, the report states, and Fox was treated for a broken nose.