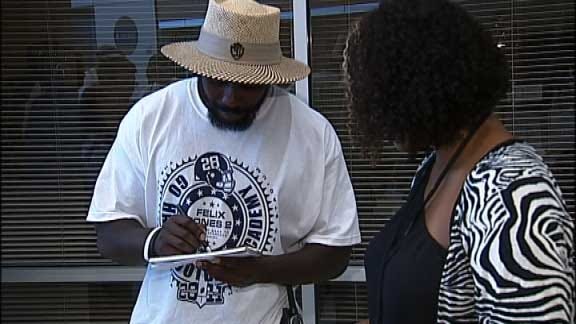 "I was thinking about going and getting a job, but then I was thinking, nah. I need to work on playing as many video games as I can," he joked.

"There were a lot of life skills going on here today, and I'm glad we have the guidance and the teachers to spread that news," Jones said with a smile. "For the kids to be here is awesome."

The Dallas Cowboys ball carrier laughed with campers and signed autographs on campus. He even played along with a grade school newspaper reporter. The mood was relaxed. You would never know from the fun-in-the-sun atmosphere that there was the looming threat of a year without pro football this fall.

"We've been sitting here for a long time," said Jones. "I've been waiting on the lockout to lift and get back to it."

NFL sides continue to meet and discuss ways to divvy up $9 billion. Owners want more cash. Players want long-term health security. The league lockout has stretched past the 100 day mark but the possibility of a season with no football on Sundays doesn't seem to be bothering the athletes.

"I'm not nervous at all," said McCoy. "They're going to get it worked out. All I can do is control what I can do. My focus right now is not the lockout. It's making sure I rehab my arm as well as I can and train to the best of my ability."

McCoy had his rookie season cut short after injuring his arm in a December game against the Washington Redskins. He is now focused on getting back fully healthy and preparing for football this fall.

"When they call me, I'll go back to work," McCoy said. "[The Buccaneers] welcome challenges. We love that we're going to play these tough teams this year."

Franks isn't sweating the lockout either. The former Union product starred at Oklahoma and transferred that success to the NFL with the Atlanta Falcons last season. He picked up his first career interception in a 41-7 win over the Arizona Cardinals last September.

Jones' camp featured other NFL players like Brandon Keith and Chris Chamberlain. The camp aims to teach kids the importance of being more than just an athlete and to focus on developing life skills that will help them make the transition from high school to college.