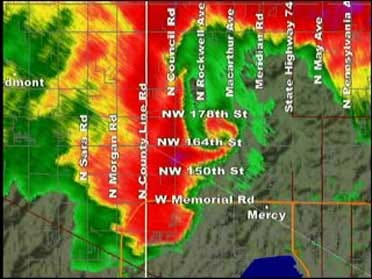 Living in tornado alley, many Oklahomans have learned to watch for wall clouds and funnels. News On 6 reporter Melissa Maynarich reports as the seasons progress, tornados will keep coming year after year.

"I just heard glass and I was holding on the boys because I was afraid we were going to get sucked up," Marci Issacson of Edmond said.

Radar detected the storm Issacson was prepared for, and weather forecasters saw the most likely circulation point in the hook echo.

Pieces of the debris were scattered in yards of the damaged Edmond homes. The advanced radar can tell the difference between a potential tornado and rain, but the radar currently being used cannot.

Alexander Ryzhkov of the National Severe Storm Laboratory in Norman said the radar can tell the history of a particular storm that has developed.

The information is fielded from a dual polarimetric radar. It is in real time and highly precise.

Scientists said, using sophisticated algorithms and data collected even before debris starts flying, forecasters will be able to predict a tornado is coming further in advance. This new technology could give people more time to prepare.

Dual Polarization also improves warnings for flash floods. The radar can tell what size hail is falling and what type of precipitation is outside.

NEWS 9 meteorologist Gary England said by using dual polarization will enable the forecasters to give a better warning for those who need to seek shelter.

The new radar is expected to be in widespread use by the year 2012.