Weight Loss Surgery And The Fight Against Diabetes 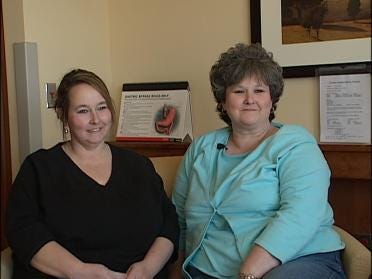 Oklahomans are facing an epidemic.  Diabetes is a disease that can cause a long, drawn out death.  In 2006, the total number of Oklahomans with diabetes was about 420,000.  But that same year, up to one million of people were at risk of contracting diabetes and that number is growing.

So why are Oklahomans becoming diabetic at such alarming rates?

Researchers say it's because Oklahomans are overweight.

More than a quarter of Oklahoma adults are considered not just overweight, but obese.  That gives the Sooner State the 9th highest rate of adult obesity in the country.

So what can we do stop this epidemic?

Believe it or not, a new study suggests weight-loss surgery may be the best possible answer for obese and diabetic people.

Results of the study showed patients who had weight-loss surgery lost 15 times more weight than those on traditional weight-loss plans.  In turn, 75% of those surgery patients got rid of their diabetes all together.

News On 6 anchor Jennifer Loren caught up with a couple of sisters willing to try the life-altering surgery.  We followed them through the entire process at a state-of the art weight-loss surgery center in Green Country.

In today's fast-paced world, time is of the essence.  When it comes to a quick meal, fast food is king.

Marla Shepherd and Kelly Butler are sisters who say they've been obese all their lives.

"I grew up, you know, it's the South. Everything that we ate was fried and so I've always, always been overweight. I don't remember a time in my life, I think I was born overweight," said Marla.

Marla and her family live on a farm near Fayetteville, Arkansas.  With two teenagers to keep up with, she says she needs more energy than she has to give.

"A lot of days now I just come in and I just feel like crashing, you know at the end of the day," said Marla.

Her sister, Kelly, lives right down the road.  With a full time job and two active boys, she says she constantly grabs junk food on the go and says her day-to-day life revolves around food.

"I mean it revolves around eating. At work we're always, if there's not anything going on, we make something up. You know. We have our dippin' Thursdays or whatever," said Kelly.

Both Marla and Kelly have tried dieting, but any weight they lose, they always gain back.

And it's not just the weight they're worried about.

"Luckily neither of us are diabetic yet. It does run in our family. And that's another reason we want to do this, is to avoid that," said Marla.

After a lot of thought and research, the sisters decided to try weight loss surgery.  They chose the New Beginnings program at Bailey Medical Center in Owasso.  Their surgeon is Dr. Luis Gorosbe.

He says Marla and Kelly are perfect candidates for weight loss surgery because of their high body mass indexes.

But before they go under the knife, the sisters have to attend a nutrition class, a support group and a psychiatric evaluation.  They'll go through weeks of tests and one last meeting with doctors to be sure they're ready for the life-altering surgery.

"I want them to be very much well prepared for their surgery. They see several consultants, specialists in their field, to check their lungs, their heart, and also internists to be sure they don't have any conditions that we will miss," said Dr. Gorospe.

One at a time, the sisters undergo anesthesia and the procedure begins.

Dr. Gorospe does all of his gastric bypass surgeries laparascopically which means they use specialized tools and a camera to do the surgery and they watch what they're doing on monitors.

In gastric bypass surgery, surgeons staple the stomach, creating a small pouch. The outlet from that is connected directly into the small intestine, bypassing calorie absorption.  The other, larger portion of the stomach is stapled shut and put to the side.

Marla and Kelly's surgeries were successful.

With her stomach now just a fraction of its previous size, Kelly says she has no choice but to lose the weight.

"You know usually you sit down to a big plate of food and that's not anymore. You get the little dish with a little amount of cottage cheese in it and that's a meal," said Kelly.

As their bodies heal the sisters will be able to eat more, but they're no longer afraid of over-eating.

They're now looking forward to their new weight and new lives.

"I know I'm going to get there, no doubt about it," said Kelly.

"The race is on now," said Marla with a laugh.

But the race is no longer against time; their race is for a better life.

As part of New Beginings' program, Marla and Kelly will return to the hospital for periodic check-ups, for years to come.

The News On 6 will continue following them and bring you updates on their progress.