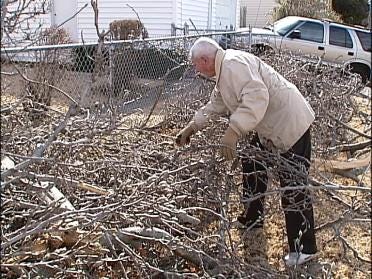 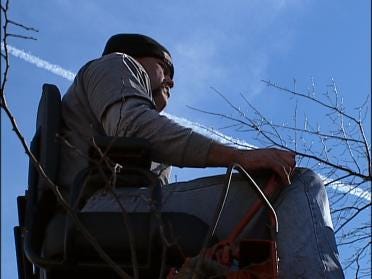 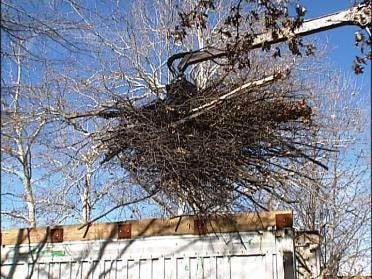 The city is going high-tech to help Tulsans keep track of debris clean-up from the ice storm in December. A website update will give folks answers to their debris dilemma. The News On 6's Terry Hood reports the city said it's about halfway through the first pass of picking up nearly 3,000,000 cubic yards of tree limbs. But, many still have questions and wonder why their yard is still covered.

Midtown Tulsa, near 32nd and Evanston, is where crews are still working high in treetops and piles of limbs are still at the curbside. In this neighborhood, however, two homes have been left out of the clean-up efforts. Most yards are clear after FEMA work crews came by two weeks ago. The residents who live in the untouched homes don't understand why they were missed. For answers, The News On 6 went to the city of Tulsa.

"They are into it about three weeks now, we've picked up about one-and-a-half million cubic yards," said Dan Crossland with the Tulsa Public Works Department.

Dan Crossland is the middle man between the city and FEMA. While he couldn't speak to this specific neighborhood, he said there are a number of places where residents feel the same. Crossland has simple advice. He said to call the Mayor's Action Center. Operators will take your name, number, and address. Then, city officials will inspect it and talk to the contractor.

"That's what we're doing right now. We're researching those and looking into those and seeing what exactly their conditions were and if there's an issue or a problem that we need to take care of," said Crossland.

A couple of reasons some of the homes are getting skipped, Crossland said, is because the debris may not be piled in the correct way. Debris needs to be away from mailboxes, utility poles, or anything that may pose a danger for the machine grabbing the branches. Another reason is the pile may contain items other than tree debris from the ice storm.

"Not trash, nothing else, just limbs," said Crossland.

The Mayor's Action LINE is 596-2100. To find out when crews will be in your neighborhood, visit The City of Tulsa website.