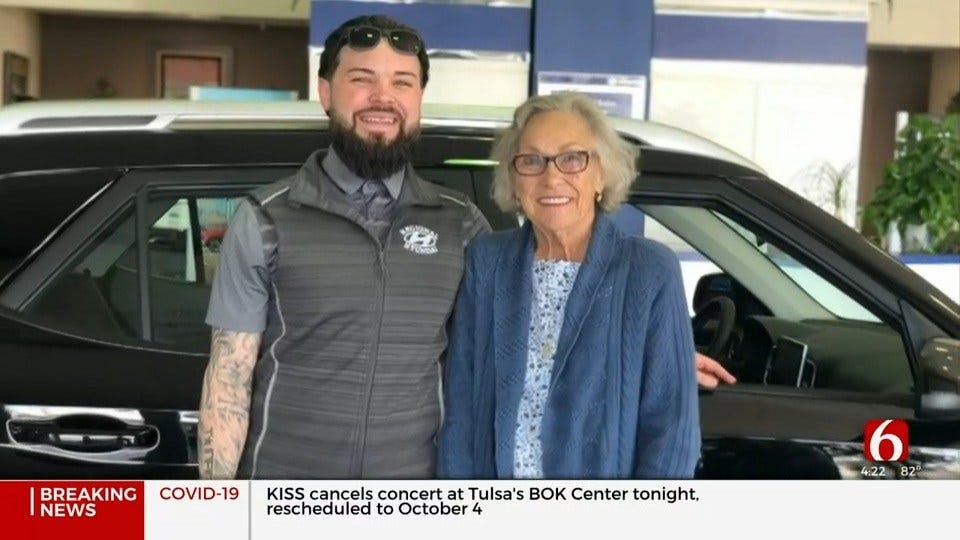 A trip to the bank led to a damaged SUV for Audrey Nutt.

"The timing was unbelievable,” said Audrey Nutt. “Because there were four lanes, and everybody was stopped. One turn signal was going for me, and I was the only one in the line, and I was turning when they swerved in amongst all the vehicles and hit me."

News On 6 tracked the February 26th police pursuit from the ground and air.

Police say 43-year-old Kim Trepp stole a truck from Regional Hyundai in Broken Arrow and drove into Tulsa, where officers chased her.

Officers were able to arrest Trepp not far from the dealership.

"Just wanted to make sure she was taken care of because it wasn't her fault either,” said MacDonald. “We wanted to be good because we're very, very involved in the community."

Nutt said she was shocked when the dealership called.

Since Nutt's insurance took care of her repairs, Regional Hyundai gave her a $500 check to cover her deductible Thursday.

"Since we are a car dealership, we wanted to make sure she was driving safe on the road,” said MacDonald.

Nutt said she's never been to the dealership before, but she'll be back, thanks to two years of free maintenance and the extra kindness.

She's due back in court in April on the larceny of an automobile charge.