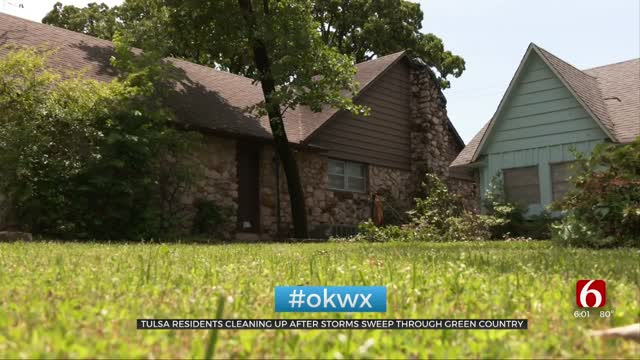 People are cleaning up after Friday morning's storm caused major damage to some homes and property in the Tulsa area.

The storms brought high winds, knocking down trees. One even took out part of a chimney.

"Really thought it was a tornado, I was waiting for windows to start breaking," said Kay Hull.

Hull said she was rocking her granddaughter around 6:30 a.m. when the storm rolled through her neighborhood southwest of I-44 and Highway 75. Winds reached nearly seventy miles per hour, knocking a tree right into their house.

"Got the satellite dish, the corner of the house, crashed through the fence," she said.

It also took out part of their chimney, sending stones and other debris into the backyard. Hull said it's a good thing it happened when it did.

"This is my grandson, and this is his favorite place to play, so if it had happened during the day, he would have been out here," she said.

But they weren't the only ones who suffered damage. Winds knocked down trees near 46th Street North and MLK as well.

"I was sleeping on my couch and my daughter ran into the living room and said 'Dad, a tree just fell onto your car' so I popped up, looked and there you have it," said Jerry Harris.

Harris said the fallen tree did serious damage to his car, his only way to get around.

"I know the back windshield is broke for sure, I haven't been able to check out the rest of the car," he said.

Next door, another tree landed right on a truck.

Both Harris and Hull are working with their landlords to get the mess cleaned up.