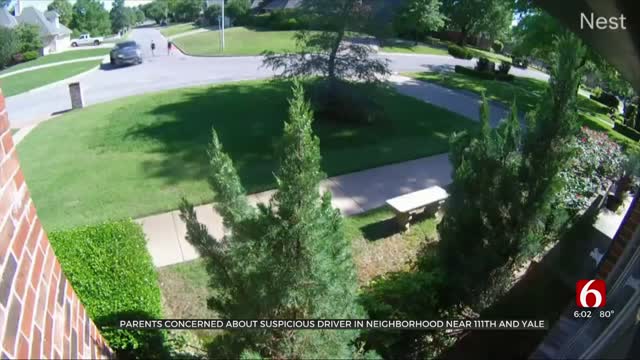 TULSA, Okla. - A Tulsa mother is concerned because she said a man tried to lure her daughter into his vehicle.

The incident happened on Wednesday in a neighborhood near 111th and South Yale Avenue.

Anderson believes the driver of the truck had bad intentions.

“I’m grateful it didn’t go further than it could have gone,” said Anderson.

Anderson said her eight-year-old daughter was riding her bike when the driver in this truck asked her child to approach his vehicle.

Anderson ran out of her home to meet up with her daughter and when she arrived, the truck was gone.

A neighbor’s surveillance camera recorded the whole thing. The truck was seen driving around the neighborhood for more than ten minutes before the encounter.

“Sometimes these encounters are innocent, and they are not what they appear to be,” said Officer Jeanne Pierce.

Although no crime was committed, Officer Jeanne Pierce said the incident is still considered suspicious activity and needs to be explained.

“We want to know who you are why you were trying to get this child into your vehicle,” said Officer Pierce.

Tulsa police are trying to identify the person so they can do questioning. If you know the identity of the person, police ask that you call crime stoppers.