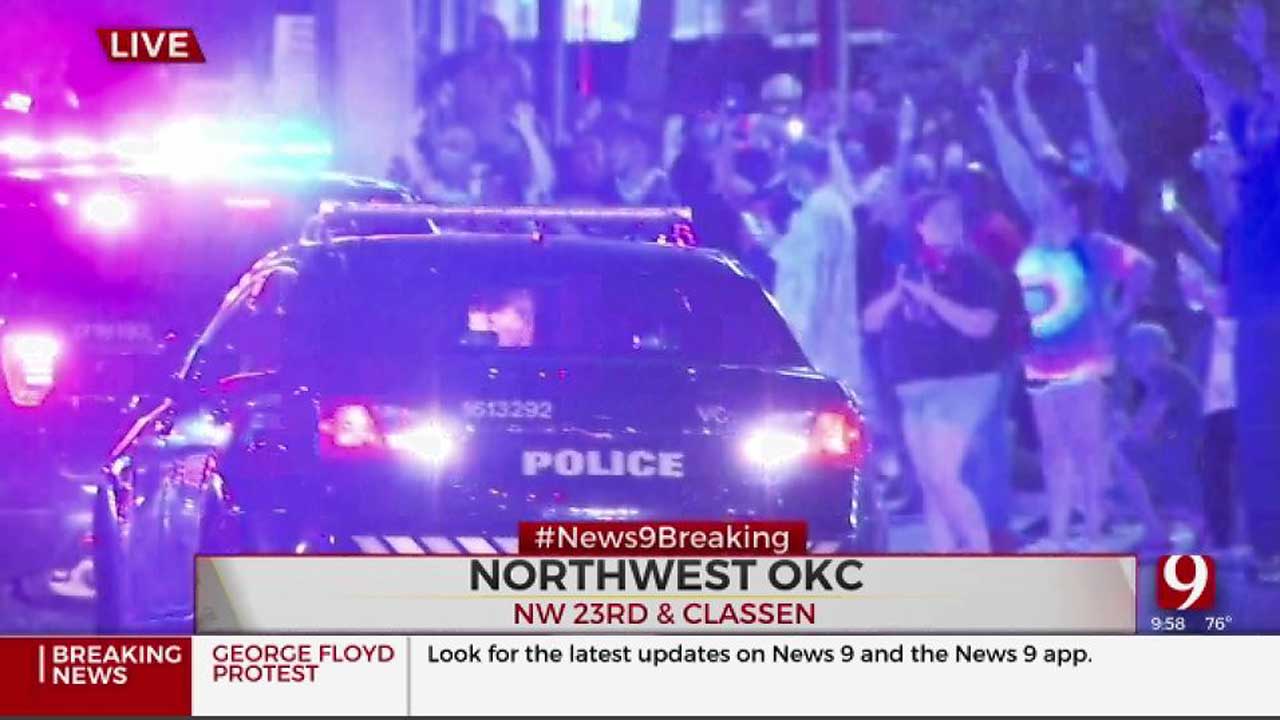 What started largely as a peaceful protest in Oklahoma City Saturday night turned violent late with agitators throwing rocks, bottles and glass at police — and officers reciprocating with flash-bangs and tear gas.

By 11:30 p.m., Oklahoma City Police declared the protest an “unlawful assembly," but by 12:30 a.m. Sunday, chaos reigned near downtown.

The protest in Oklahoma City, inspired by other protests across the country in response to the death of George Floyd, allegedly at the hands of police in Minneapolis, was largely peaceful until about 10 p.m. Officers arrested 13 protestors described as agitators, accused of assaulting officers.

The protest started at about 7:30 p.m. near Northwest 23rd Street and Classen Boulevard and worked its way downtown to the Oklahoma City Police Department headquarters by midnight.

Tense protests over the death of George Floyd and other police killings of black men grew Saturday from New York to Tulsa to Los Angeles, with police cars set ablaze and reports of injuries mounting on all sides as the country lurched toward another night of unrest after months of coronavirus lockdowns.

Protests began in Minneapolis following Floyd’s death Monday after a police officer pressed a knee on his neck for more than eight minutes, have left parts of the city a grid of broken windows, burned-out buildings and ransacked stores. The unrest has since become a national phenomenon as protesters decry years of deaths at police hands.

— In Washington, the D.C. National Guard was called in as hundreds converged on the mall and pockets of violence erupted during a second straight night of protests. Outside the White House, crowds chanted, taunted Secret Service agents and at times pushed against security barriers, and police used pepper spray. President Donald Trump, who spent much of Saturday in Florida for the SpaceX rocket launch, landed on the lawn in the presidential helicopter at dusk and went inside without speaking to journalists.

— In Philadelphia, at least 13 officers were injured when peaceful protests turned violent and at least four police vehicles were set on fire. Other fires were set throughout downtown.

— In the Greenwood District of Tulsa, Oklahoma, the site of a 1921 massacre of black people that left as many as 300 dead and the city’s thriving black district in ruins, protesters blocked intersections and chanted the name of Terence Crutcher, a black man killed by a police officer in 2016.

— In Los Angeles, protesters chanted “Black Lives Matter,” some within inches of the face shields of officers. Police used batons to move the crowd back and fired rubber bullets. One man used a skateboard to try to break a police SUV’s windshield. A spray-painted police car burned in the street.

— And in New York City, dangerous confrontations flared repeatedly as officers made arrests and cleared streets. A video showed two NYPD cruisers lurching into a crowd of demonstrators who were pushing a barricade against one of them and pelting it with objects, knocking several people to the ground. It was unclear if anyone was hurt.