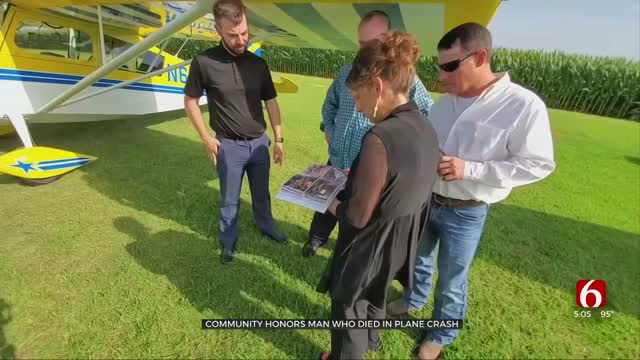 While it’s sometimes hard for funerals to measure up to the treasured memories, that would not work for the funeral of crop duster pilot Paul Gould, and certainly not for the people of Webbers Falls.

Last Friday, Gould was killed in a crash while spraying crops. As word spread, pilots starting planning to fly in for the funeral. The pilots he had encouraged to pursue their dreams gathered on the ground to share their memories. The grass runway in a corn field that he used for his work, was busy with planes and pilots all connected to one man.

Daniel Sheffield said, “I just think for everything he’s done for this community as farmers, which farming is this community, this is the least we could do.”

As the casket was wheeled out after the service, everyone paused to look up. Pilots, those who Gould had impacted, flew over one by one as the casket was taken to the hearse. The final plane in formation, a spray plane, left a trail of smoke over Webbers Falls.