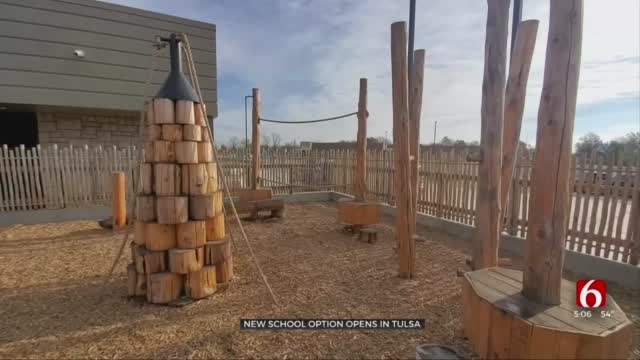 A new school that’s now open in Tulsa has created another option for families and children as young as just a few months old.

The newest “educare” opened this fall, but COVID-19 kept visitors outside. They said they’ve had success with their precautions and are ready to show it off.

Educare Director Cindy Decker said this new school will change lives for children and the playground is just part of how they'll do it.

It's designed around exploration, with a small performance stage, of course plenty of things to climb on, and dig into. Here's it is expected children this age will get messy. There's plenty of soap and water for that.

In a preschool room for three and four-year-old’s, there is an emphasis on reading, but also is an option for a small child who just needs a minute.

“We are here to make life feel safe and they're allowed to take this time,” Decker said.

The school is empty now on Fridays for sanitizing, but normally it operates every weekday, offering an all year program to uplift children likely to fall behind, even before preschool.

“Research and economists have told us that eliminating those achievement gaps later in life is very expensive, it makes much more sense to invest early, prevent that achievement gap from ever forming, send kids off to elementary school ready for those programs,” Decker said.

Tulsa now has four educare locations, intentionally located in poor neighborhoods, near Tulsa public schools. The newest one is by Celia Clinton Elementary.

The walls are covered with murals, the lobby is big and open, and the kitchen has a window so students can see the cooks. The final touches are being added to another playground - the school has two - because students will go in and out to learn.

There are 16 classrooms, with each class no larger than 17 students and three teachers.

“We do that because it's our vision to even the playing field and give every kid a fair chance at life success,” Decker said.

It costs about $17 million a year to run all of the Tulsa Educares; much of that is taxpayer education money, but $3.5 million of it comes from the George Kaiser Family Foundation.

There are limited spots, but open enrollment for children from birth until they're ready for public preschool.