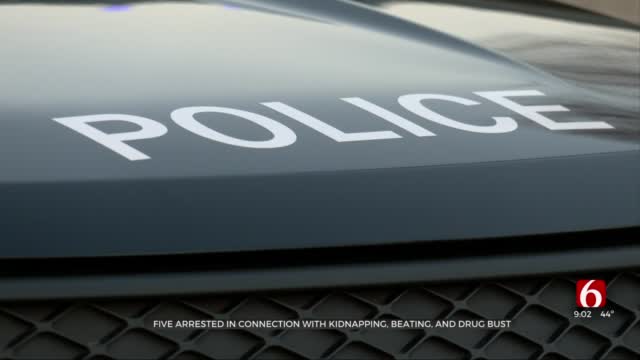 Catoosa Police arrested five people after a man ran inside a casino saying he’d been kidnapped, robbed and beaten. During the arrest, police also discovered more than 1,000 illegal pills.

The investigation started when Catoosa Police responded to a call at the Hard Rock Hotel and Casino.

"When we got there we realized this was actually kind of a crazy call," said Corporal Brent Colbert with Catoosa Police.

During the investigation, police found out that the man who ran inside the hotel had been originally kidnapped in Turley. He was then taken to a hotel where he was beaten and robbed by the five suspects.

The victim told police he was then taken to Hard Rock, where he tried to escape, but in the struggle was beaten with a loaded shotgun.

"Somehow after he got hit over the head with a shotgun, he got loose," Colbert said. "He runs inside and finds security, they detain three of them at that point because three of them follow him inside."

Catoosa Police found the other two suspects at the Waffle House next door ordering food and arrested all five suspects.

Omar Rodriguez, Demetri Kungilies, Mohamed Daghlawi, and Bryant Sosa were taken to the Rogers County Jail. The fifth suspect is a teenager and his identity has not been released. Two of the men were from Arizona.

After the arrest police found one of the main suspects had carried over 1,000 oxycodone pills inside the casino. Another suspect also tried to sneak drugs into the jail but was caught and given another felony charge.

Police across Oklahoma have seen several fake oxy pills in recent months that were laced with Fentanyl, a highly potent drug that's been causing deaths across the country.

Colbert believes the investigation will end up crossing several state lines. The Tulsa County Sheriff's Office will take over the kidnapping investigation because it happened in their jurisdiction.

"A lot of the times people will say that drugs are a victimless crime," Colbert said. "I think this right here proves that they're not."