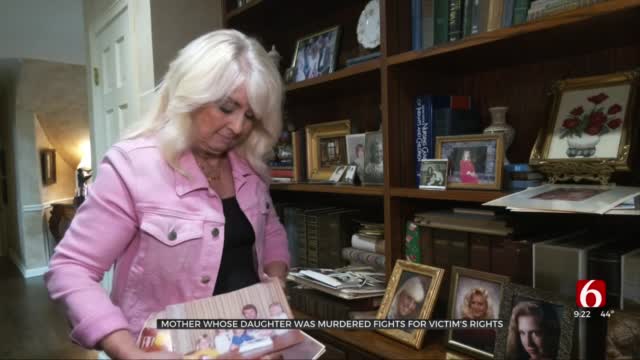 A mother whose daughter was murdered at a Girl Scout camp in Mayes County 44 years ago has been a force for change over the years for victims’ rights.

On the 40th anniversary of National Crime Victims’ Rights Week, she’s still fighting to give victims a voice.

Sheri Farmer said losing her daughter Lori Farmer in 1977 changed her life forever, and she has spoken up since that day to make sure Lori's life will always matter.

Sheri said Lori was smart, strong, loving and the oldest of five kids.

"She loved when a new baby arrived. She was the quintessential oldest child, and she took care of everyone," said Sheri.

Lori was about to turn nine when she asked her mom to go to a Girl Scout summer camp in 1977.

"She had never been to camp," Sheri said.

On her first night there, Lori was sexually assaulted and killed inside her tent along with two other young girls. A suspect was arrested and tried, but acquitted, then later died, so to this day the case remains unsolved.

"That's when I told Lori, we would continue searching for the right answers and make sure her life was not in vain and something positive would come," Sheri said.

Sheri has spent every year since the worst day of her life fighting for victims’ rights because during the trial, the victims’ families had so few of them.

Part of that effort was passing Marsy's Law in 2018, which gives Oklahoma crime victims resources every step of the way in the court process. Marsy’s Law For Oklahoma State Director Kim Moyer said it's changed a lot of lives for the better.

"It's to give a voice for victims, and give them a place to turn, somebody to speak to," Moyer said.

This week is National Crime Victims’ Rights week and Sheri said she'll continue to fight for crime victims, as she holds on to faith and family, while always remembering her daughter.

"We wonder what she would be like, who she'd be married to, what she'd be doing," Sheri said. "We are a family of faith-- we hold that dearly."

Sheri said it's important for everyone, even those who have never been a crime victim, to fight for and support victims' rights.

For more information on Marsy’s Law, visit the website here.