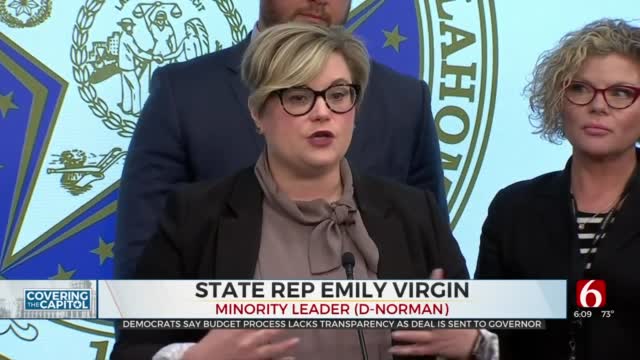 Update: The Senate passed the $8.3 billion state budget restoring COVID-19 cuts and boosting education funding in a 38-9 vote. The budget has now been sent to the governor.

Oklahoma House and Senate Democrats blasted the state budget process saying all Oklahomans lose when just a few lawmakers come up with the budget behind closed doors.

“We’re sitting in the meeting, and we are being handed bills that we are about to be asked to vote on, and this is not an exaggeration, the bills are actually sometimes warm because they just came off the printers,” Senate Minority Leaders Kay Floyd, D-OKC, said.

“It’s not just Democrats who are left out of this process; it’s also the vast majority of legislative Republicans,” House Minority Leader Emily Virgin said.

In response, Republican House leaders pointed to what they said were more than 100 committee and subcommittee budget meetings.

"Oklahomans are interested in what is in the budget, and this budget was the most comprehensive in recent memory,” House Speaker Charles McCall, R-Atoka, said in a statement responding to a question about transparency.

Republican senate leadership did not respond to a request for comment.

With Republicans holding supermajorities in both the House and Senate, Democratic leaders were asked why they should have input in the process.

“I’m not sure if they would understand the concept or definition of democracy. I represent 78,000 people,” Floyd said. “Why does the person who lives in my district why are they not entitled to the same sort of representation that someone who lives in another district that has Republican?”

Late Thursday afternoon, a block of Republican Senators raised transparency concerns during floor debate, questioning why bills they claim are not pertinent to the budget, were brought through the Joint Committee on Appropriations and Budget after the deadline to pass non-budget bills had passed.

The group led by Sen. Greg McCorney, R-Ada, voted against the bills. One broadens authority of the Administrative Director of the Courts and another directs the Oklahoma Health Care Authority to assess ambulance service provider fees. Despite transparency concerns expressed earlier in the day, Senate Democrats voted in favor of the bill, sending it to the Governor by vote of 25-21 and 29-17.