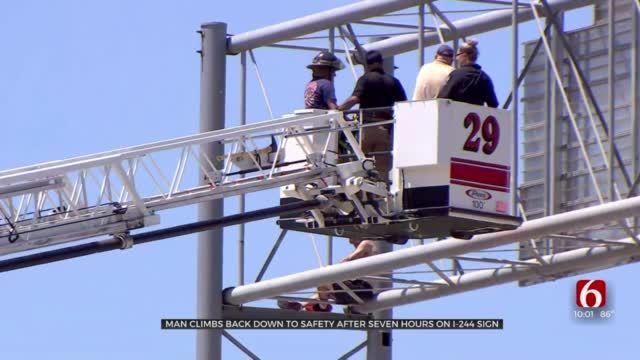 Negotiators worked with a man for hours to convince him to climb down from a sign over I-244.

The man climbed the sign around 9 a.m. and climbed down around 4 p.m. Tuesday.

Tulsa Police said it is a relief this man was able to climb down on his own. They said he was in a mental crisis, and they are glad he wasn't hurt.

Ricky Jewell, a witness, said he also tried to help.

"I just feel that if I can talk to him, I can get him to come down, and I just walked closer and started talking to him," Jewell said.

Jewell said he saw the interstate was closed but was able to drive under a bridge and saw the man on the sign. He said he prayed for what to say to the man and felt called to go talk to him.

"I told him that this ain’t the end of the world, there's people that will help you, and I said if you come down, I'll help you," he said.

Negotiators talked to the man from a Tulsa Fire Department basket, and at one point he asked for an officer from the Bartlesville police department.

Related Story: Man Comes Down From I-244 Sign After 7 Hours

Tulsa Police Officer Andre Baul said he talked to the man for about an hour, and these situations always take time.

Baul said negotiators have talked to the man previously in a separate incident. He said the man climbed up the sign Tuesday because he was worried about legal issues he was having.

"He was scared about the future, about what he was going to be facing once he came down," Baul said.

Jewell said while it was a stressful day, he's thankful the man is safe.

"Looking at it from my perspective and his loved ones, no matter who he is or what's going on in life, there's always tomorrow, there's a brighter day ahead of us," Jewell said.

Tulsa Police said the man was taken to get medical treatment.