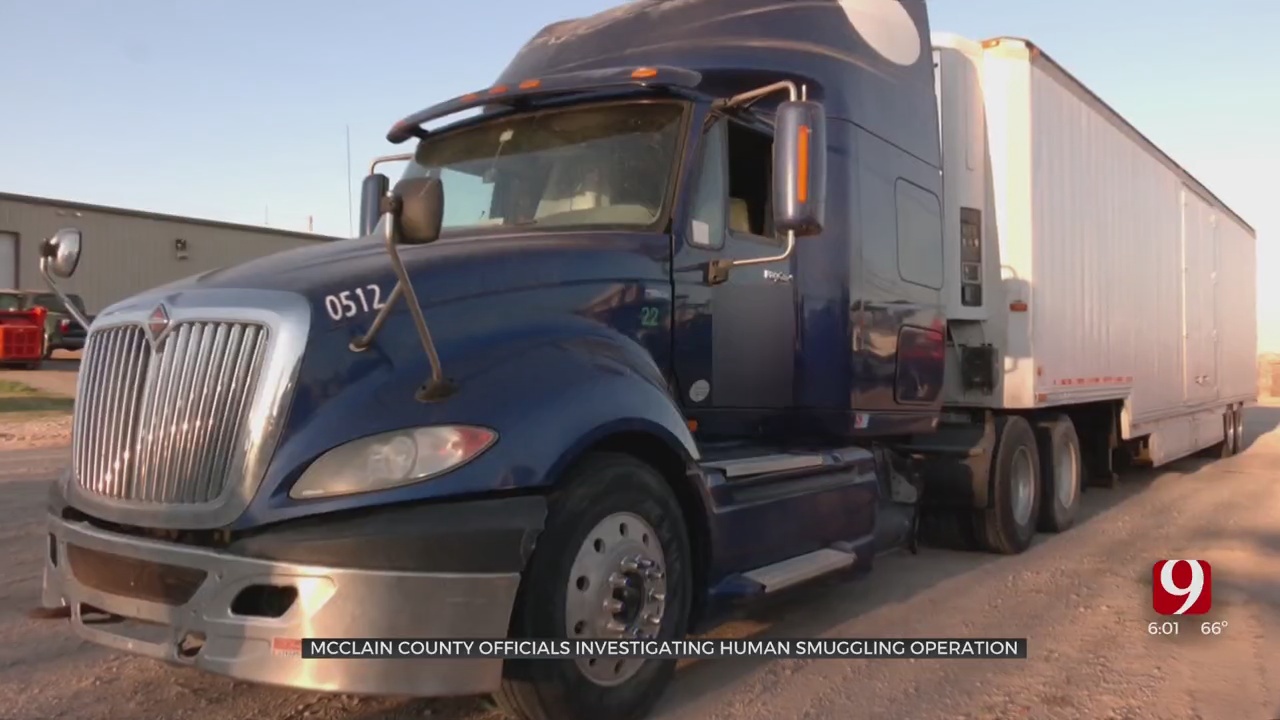 Editor's Note: News 9 Photojournalist Mauricio Rodriguez contributed to the reporting of this story.

A human smuggling case is under investigation in McClain County.

A Wayne man discovered what he says were dozens of people in the back of a semi-trailer Monday night.

The incident happened across the road from McClain County Towing and Recovery, located on the Highway 59 exit to Wayne off I-35.

Owner Joshua Cruz called 911 at about 9:20 p.m. But before that, he and his staff say they discovered dozens of people in the back of the semi-trailer and had a confrontation with smugglers.

The events began when Cruz says a semi-truck and six to nine vehicles pulled into the lot across from his tow shop. He says he was just pulling into the lot with a disabled vehicle.

Cruz says his initial thought was that this was a customer needing towing services.

“I jumped in our service vehicle, went across the road,” Cruz said.

Then, he says the vehicles scattered.

“The driver of the semi jumped out of the truck, ran around the truck, and took off…we’re hearing noises coming from the trailer, banging on the side of the trailer saying help me, help me. Of course, it was in Spanish, it wasn’t in English…we run to the back, open the trailer, and lo and behold, there’s a trailer full of people.”

They got out, and he says they seemed to be disoriented.

The McClain County Sheriff’s Office reports finding 15 spots where people had urinated near where the semi was parked.

The McClain County Sheriff Landy Offolter says he estimates 20-30 people were in the truck.

Cruz says there were children in the truck, but the sheriff’s office does not corroborate that information.

Cruz and some of his staff speak Spanish. He says he was able to understand the majority of what the people were saying, and said they told him they were from Guatemala, El Salvador and Honduras.

A lot of the initial details of what occurred were initially reported hinge on Cruz’s firsthand account, and on what he says these people told him.

He says his crew hid dozens of people behind his shop and gave them water.

He says they told him they were afraid, had been abused, and some reported being trafficked.

He says two armed gunmen came back to retrieve the smuggled people, so his staff closed the gates of the shop yard.

That’s when Cruz said he called 911. As lights and sirens approached, Cruz says all but three people fled.

In a statement released Tuesday, MCSO officials said they were dispatched to a report of a ‘blacked out’ semi-trailer with 40-50 people seen exiting at about 9:20 p.m.

Sheriff Landy Offolter said Thursday the call for dispatch was for reports of an armed gunman.

“No doubt there was something criminal going on, but we didn’t catch the guys in the truck,” Offolter said.

An Oklahoma City Police helicopter assisted with a grid search and was dispatched at 12:30 a.m., according to OCPD spokespeople.

The report says they discovered ‘three foreign national females were located at a nearby business and requesting help from the business owner. Deputies reported medical care to the females and transported them to a safe location.”

Cruz says there were no resources available for the women that night, so he paid for supplies to feed and house the individuals at the Holiday Inn in Purcell through Wednesday morning.

“We kept guys out all night. That next morning, we located a couple of individuals south, of Hispanic descent, and we found two in the town of Wayne,” said Offolter

Seven individuals total were located. Offolter says he speculates others were picked up on the road after running from the tow shop.

Sheriff Offolter says Homeland Security interviewed the seven who were found and said they were from Guatemala, had walked across the US border and got in the truck in El Paso after paying thousands to be transported to areas across the country

Offolter says OBN and DHS assisted with the interviews Tuesday. He says all seven individuals reported similar details about their experience and how they came to be smuggled in the back of the semi-truck.

All seven were ‘released to family’ Wednesday morning. Offolter says they had their own cell phones.

Offolter says they were headed to Los Angeles, Colorado and Georgia, and one destination in Oklahoma.

Cruz says he was there when the smuggled people were reunited with family, and he says it was a heartfelt moment.

There are some concerns about the way the incident was handled on Monday night.

A first responder on the scene that night who wants to remain anonymous due to concerns about losing their job told News 9 that opportunities were missed, and that local responders did not have adequate support to handle a bizarre situation.

“Possible suspects involved are now likely long gone. a lot of time was lost, and we’ll never be able to interrogate them to figure out what their intentions were.” the anonymous first responder told News9.

Express Towing and Recovery is currently holding the semi-trailer until law enforcement seizes it as evidence.

The semi-truck that was used was purchased at auction in Florida in 2018 and has not been registered or insured since.

Spokespeople with the company say they logged the contents of the trailer upon picking it up and discovered bottles of urine, masks, empty water bottles, clothing, and trash in the trailer.

They say the semi-trailer was a standard furniture moving trailer. It had been modified for human smuggling, with cooling and fans installed. An interior light had also been installed.

News 9 has requested Cruz’s 911 call and other documents related to what happened.

MCSO officials say they case will likely be handed over to the Department of Homeland Security next week.

Officials say they are working to verify the details of Cruz’s account.

OBN and DHS continue to assist with the investigation.

MCSO officials do not think the community is at risk but say to report any information.

No arrests have been made in this case.