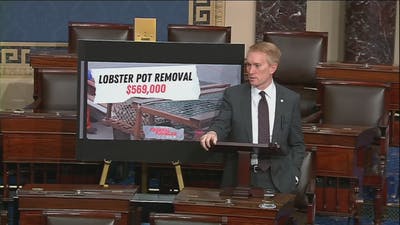 Oklahoma Senator James Lankford this week rolled out his latest report on what he says is wasteful spending in the nation's capital.

"Federal Fumbles 6" highlights dozens of projects and programs that Sen. Lankford suggests, while perhaps serving a legitimate purpose, should not be funded with federal taxpayer dollars. Lankford went on the Senate floor this week to share with, or perhaps shame, his colleagues over what he found this year.

Yes, Lankford says, about half a million dollars went to the removal of so-called derelict lobster pots off the coast of Connecticut.

"For those of us in Oklahoma, if you told me there’s a lobster trap and there may be a lobster in it and you can keep the trap and the lobster if you wanna go get it," noted Lankford, "we would go get it."

One of the biggest wastes, Lankford says, was due to President Biden's insistence on stopping the construction of former President Trump's border wall when he took office.

"We spent $2 billion this last year not building the border wall," Lankford explained. "The contracts had already been let out, the steel was already purchased, the steel, in fact, is laying on the ground in the desert still today. Everyone was already hired and there were literally individuals on the ground ready to do the installation."

Lankford points out federal debt has now topped $30 trillion, and thus it might be appropriate, he says, to rethink whether to spend half a million dollars to revamp a ski jump in New Hampshire, $3 million for streetscaping in Joplin, Missouri, or $15,000 for a monkey opera.

"I am very aware there are a lot of folks in this room that are just trying to help," Lankford said, "but we are causing real problems with inflation, with overspending as a nation, [and] that’s got to pull back."

Such pleas may fall on deaf ears, though, now that earmarks, or 'pet projects' as some call them are again legal. The FY 2022 budget includes $9 billion in earmarks, the requests coming from Democrats and Republicans alike.